By combining the capabilities of Blocklet Server and Blocklet, Blocklet Launcher achieves the goal of allowing users to run an application at a very low cost of use. This process helps users eliminate the need to purchase servers, configure servers, deploy applications and other efforts that require professional skills, lowering the threshold for deploying a decentralized application.

With more blocklets published to the Blocklet Store, users will find it much easier to deploy the blocklet they need, such as running an online game, creating an NFT marketplace, etc., through a rich set of Blocklets.

Blocklet Launcher provides the necessary functionality to meet the needs of deploying an application, mainly including:

This article will demonstrate the capabilities of Blocklet Launcher by running an NFT marketplace.

NFT Marketplace is a website where you can publish NFTs and bid on NFTs. We will deploy an NFT marketplace from scratch based on the NFT Marketplace Blocklet to show how to deploy a blocklet through the Blocklet Launcher.

The final NFT Marketplace results are shown in the following figure: 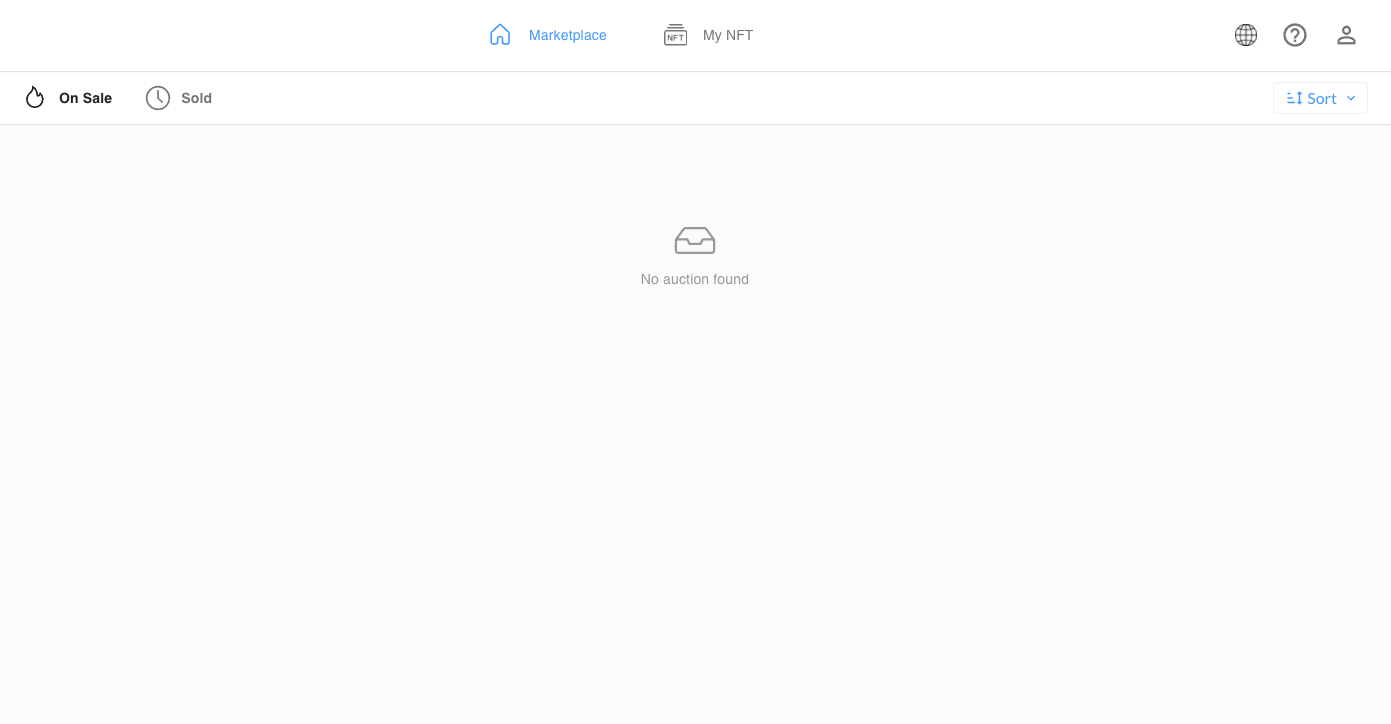 1.1 First we go to the https://store.blocklet.dev website, search for "NFT Marketplace" Blocklet, and then click the "Launch" button to enter the Blocklet Launcher page.

On this page, you need to read the Blocklet agreement carefully, if there are no problems, click "Agree To The EULA And Continue" to go to the next step. 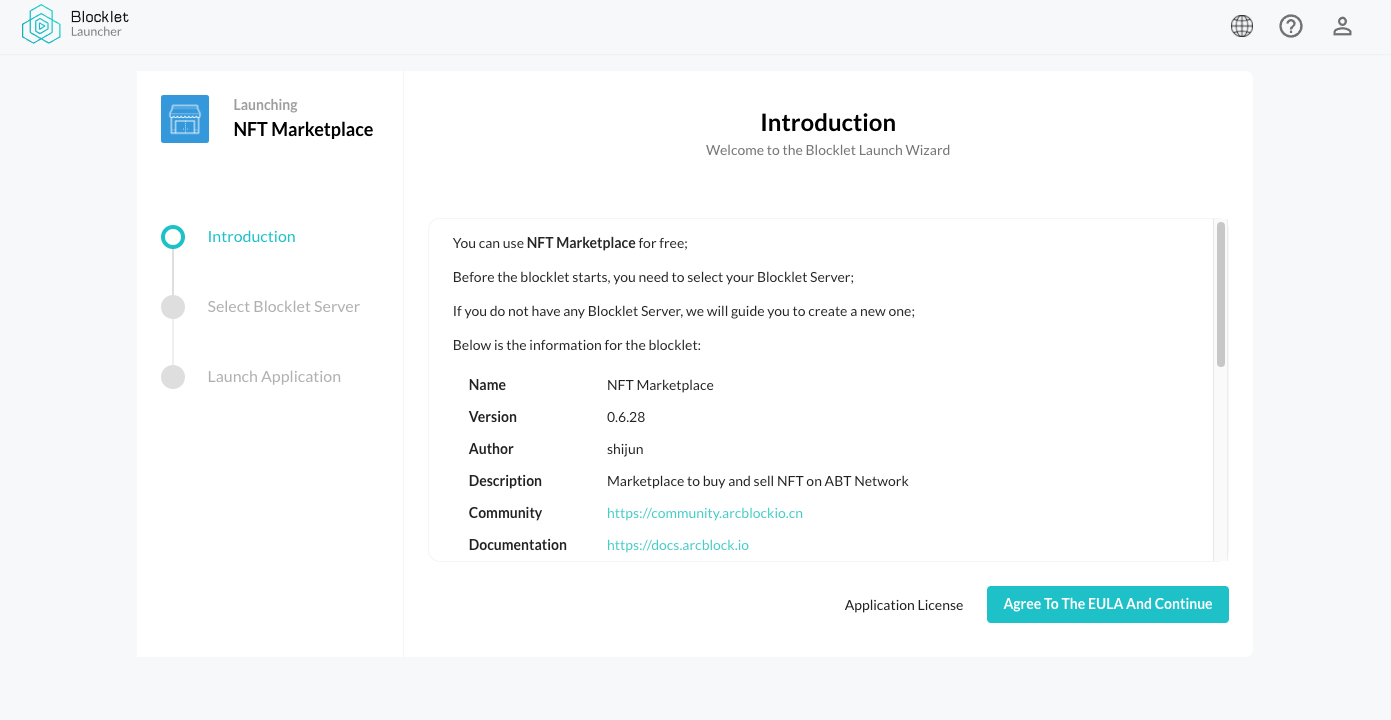 Click on the "Connect Launcher" button to connect to the Launcher using the DID Wallet.

If you have already connected before, this step can be omitted. 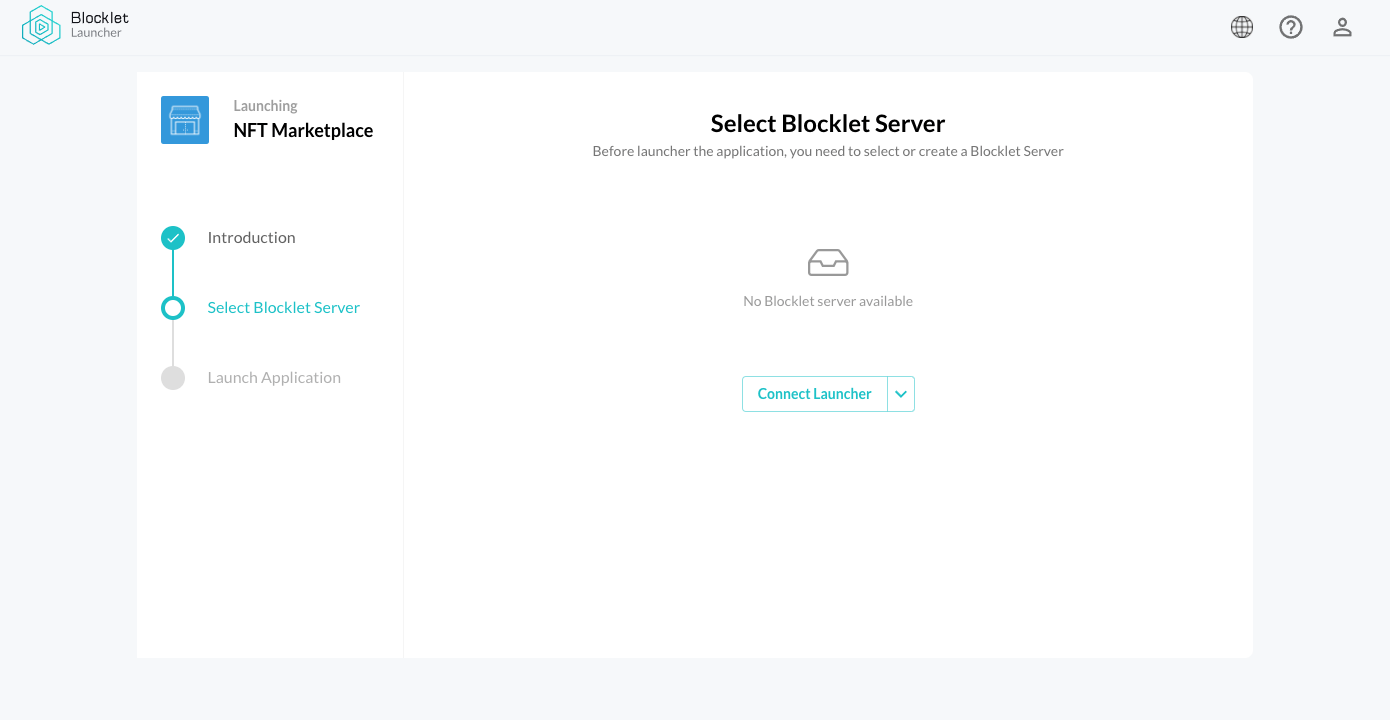 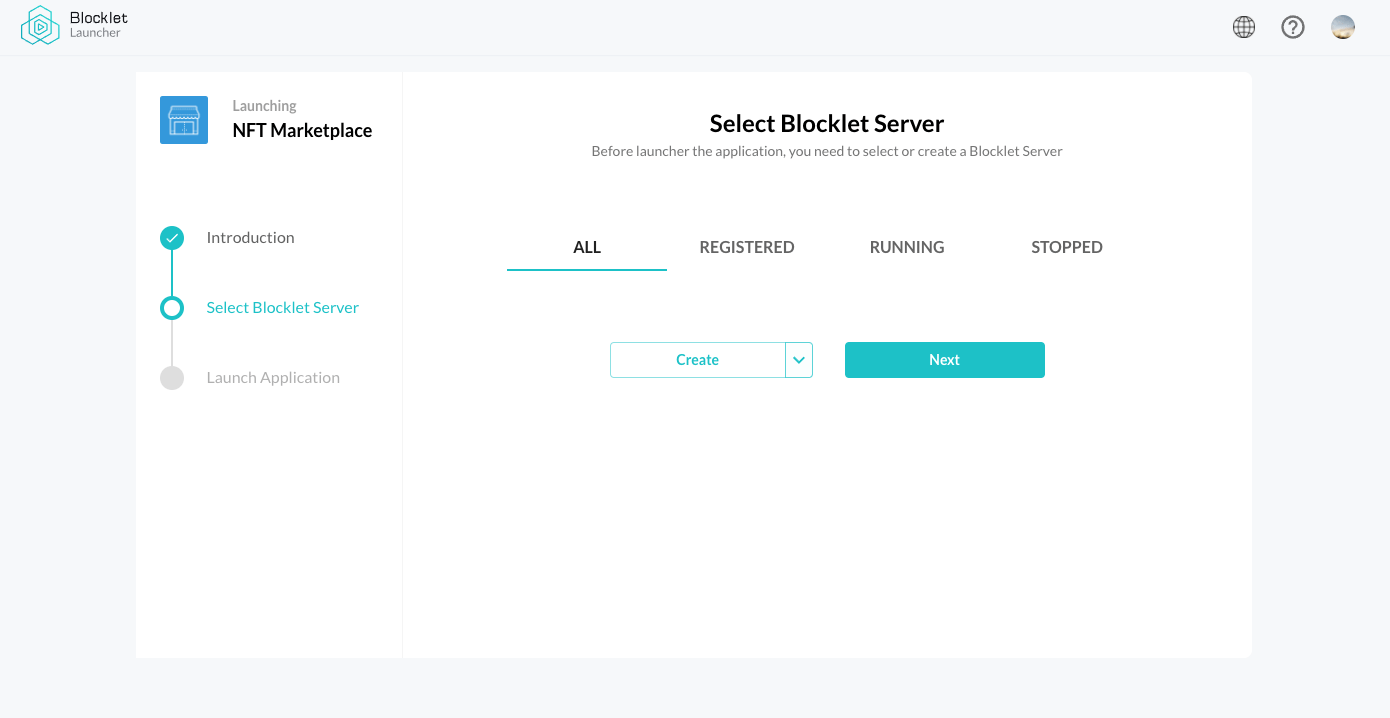 ABT and credit card (USD) payments are now supported, in this case using ABT payment. 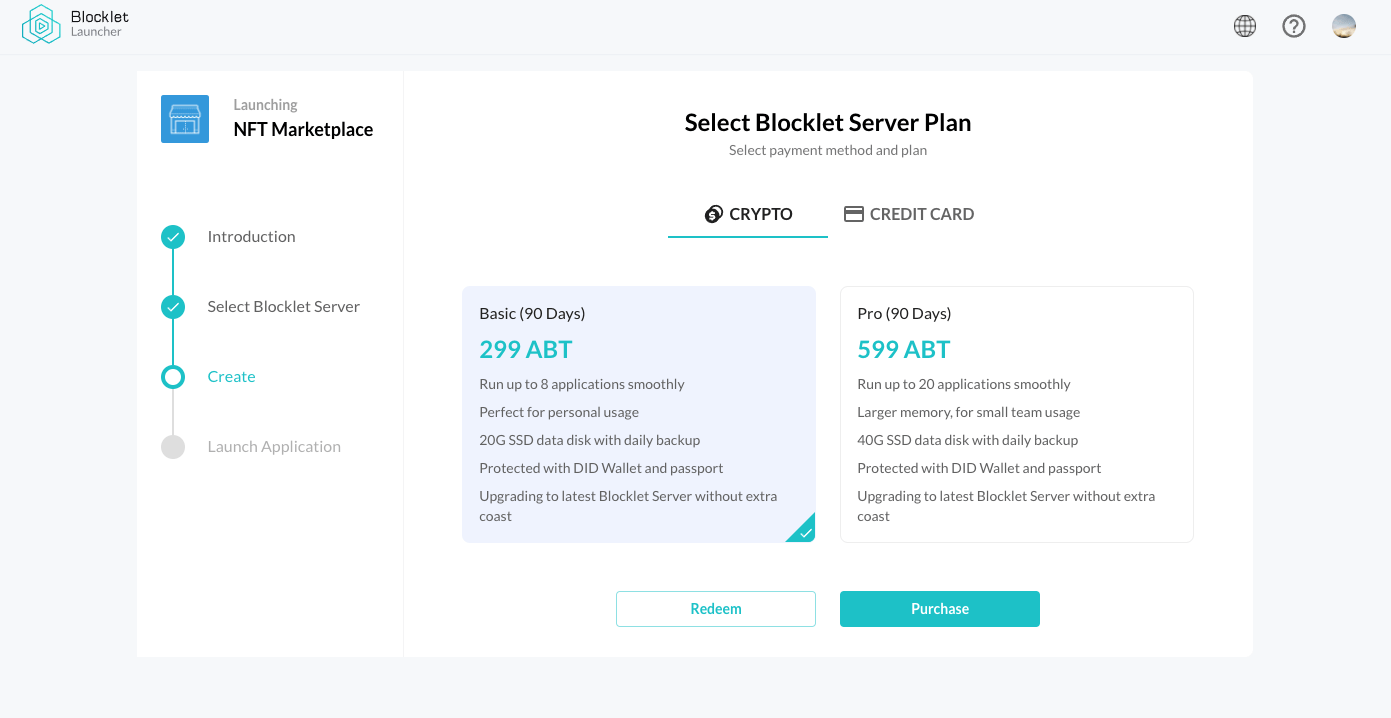 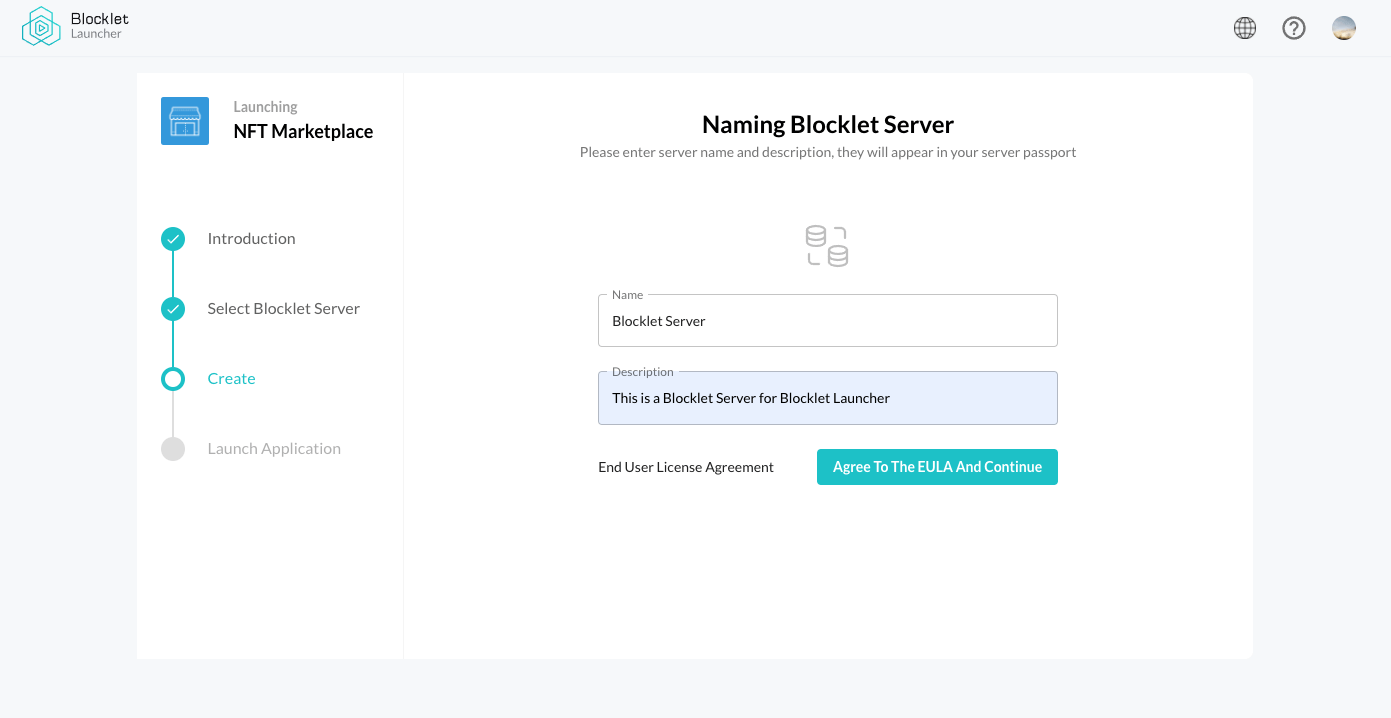 The launch process takes about 3-5 minutes. 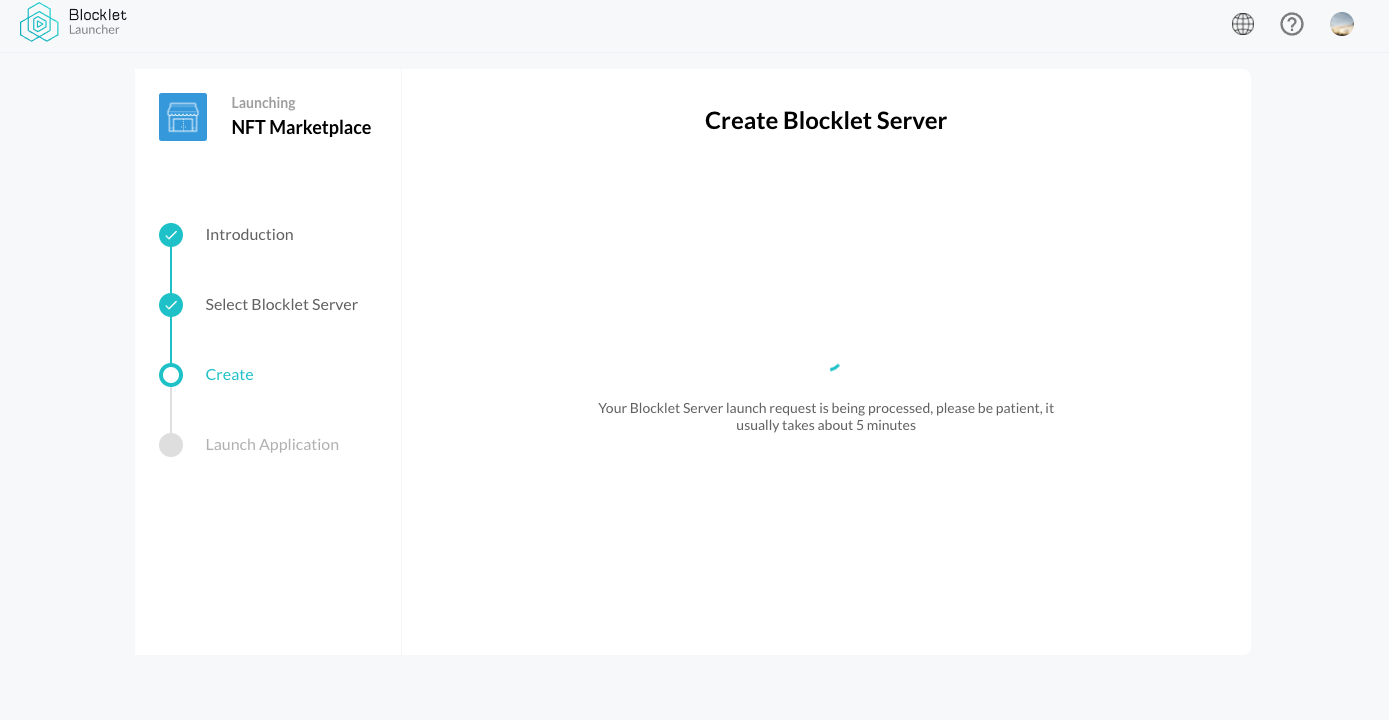 Here you need to confirm the application information again, click the "Next" button: 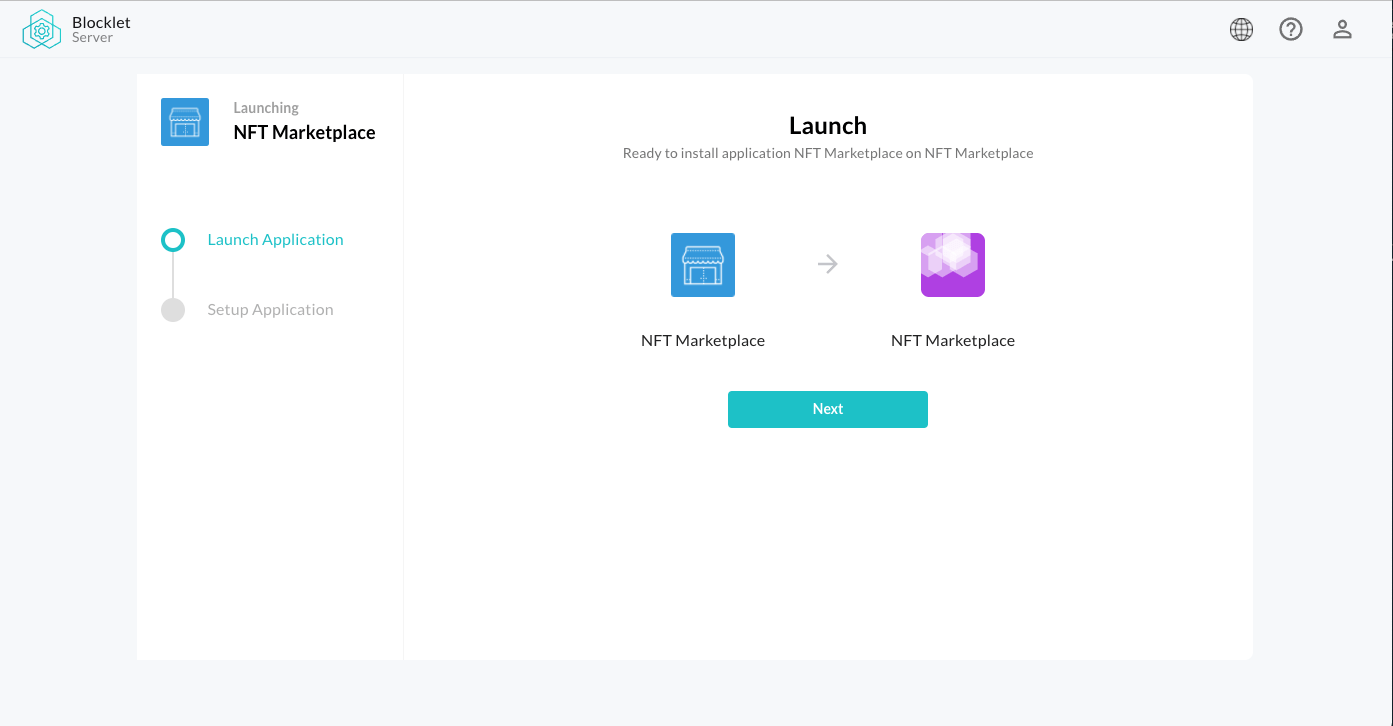 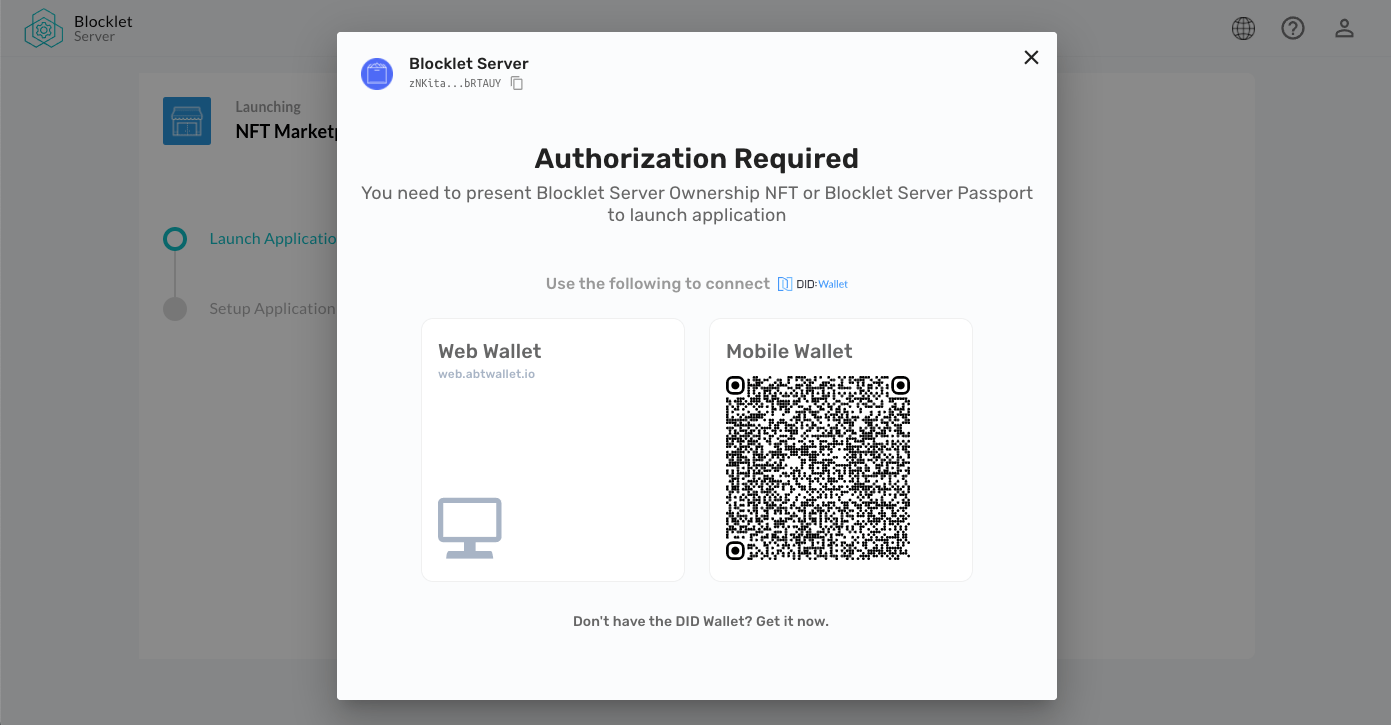 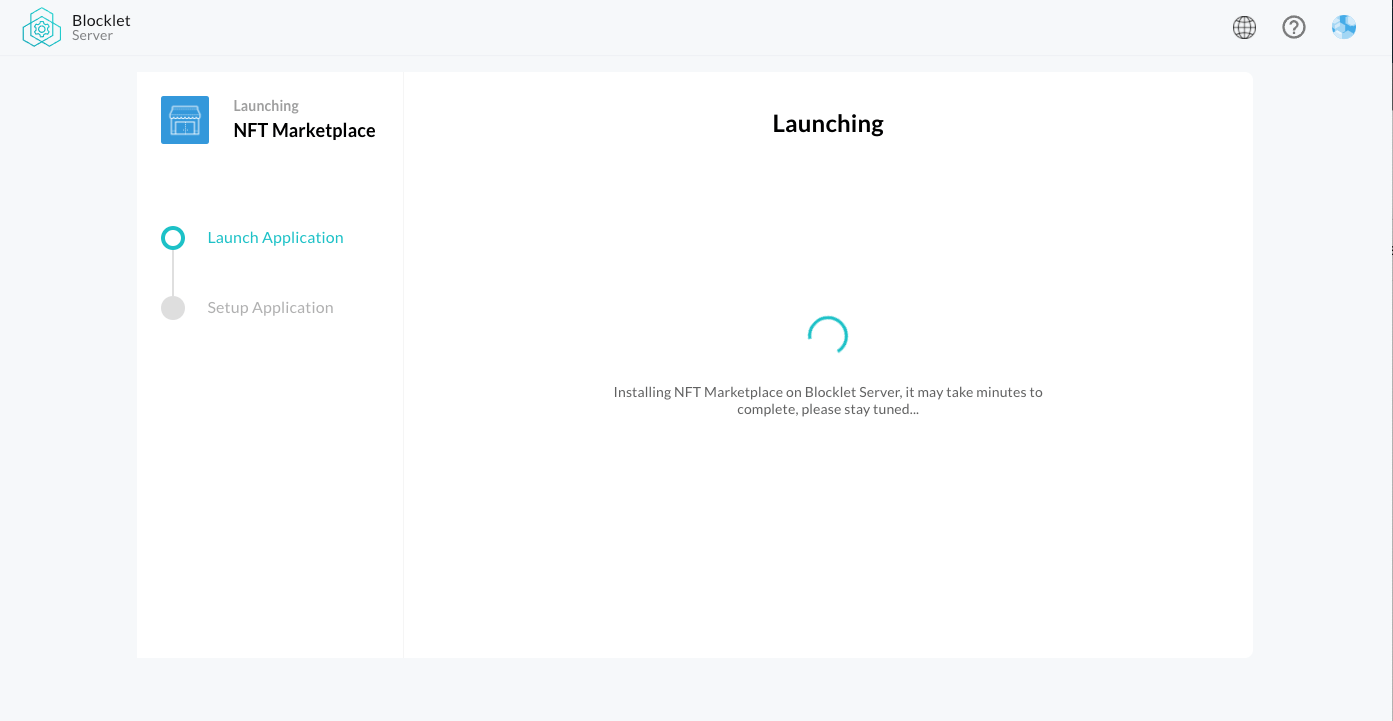 After the application is installed, the page will automatically jump to the Blocklet Setup page. In the setup page, we need to do some necessary configurations for the application, such as domain name, permissions, etc.

Here you need to verify the NFT of the Blocklet Server where the NFT marketplace is located. 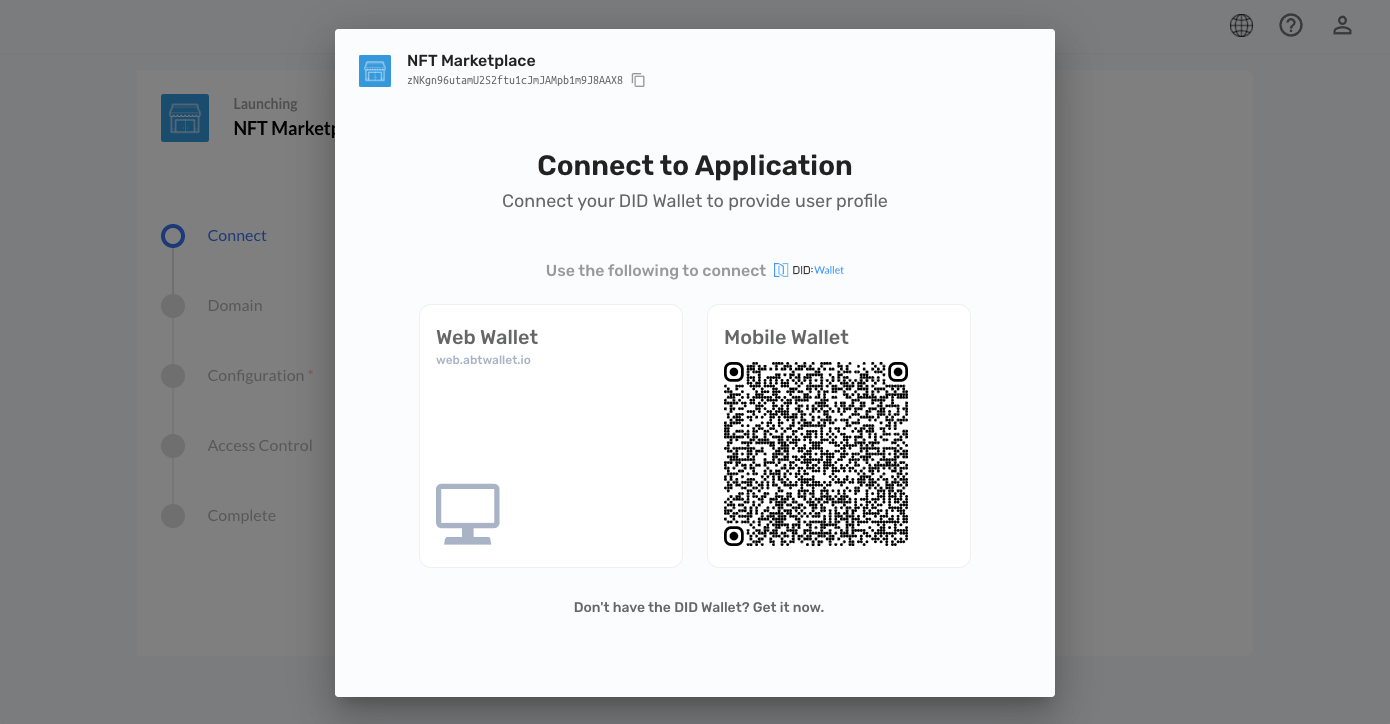 After the application is installed, Blocklet Server will automatically assign two addresses to the application: an IP Echo address and a DID Domain address, and you can also input a custom domain name.

!! If you choose a custom domain name, make sure the domain name has resolved to the server address where the Blocklet Server is located.

This demo selects to use the automatically assigned addres, 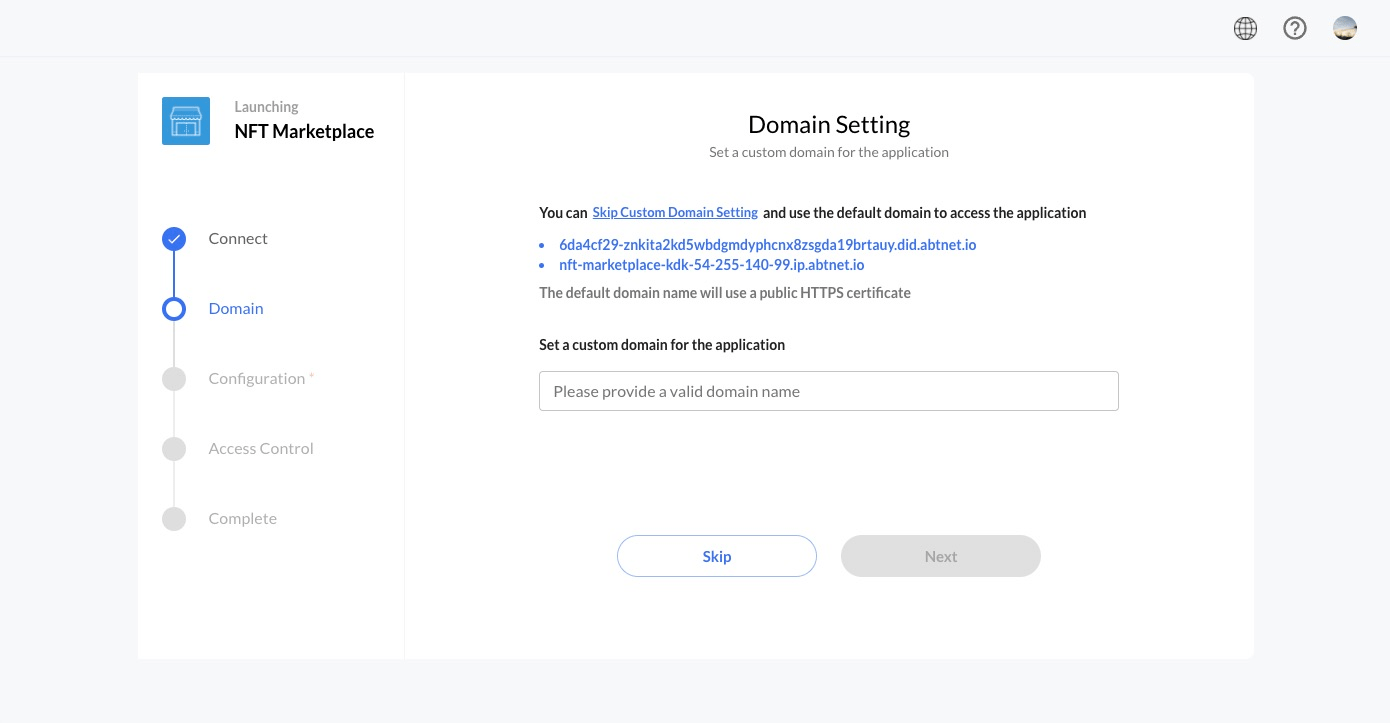 After configuring the domain name, we can custom the name of the application, description information, the theme color of the pass to be issued by the NFT marketplace and other information in the "Settings" page.

Fields with * are required.

In addition, the necessary conditions to start the NFT market must be set here: an available chain. 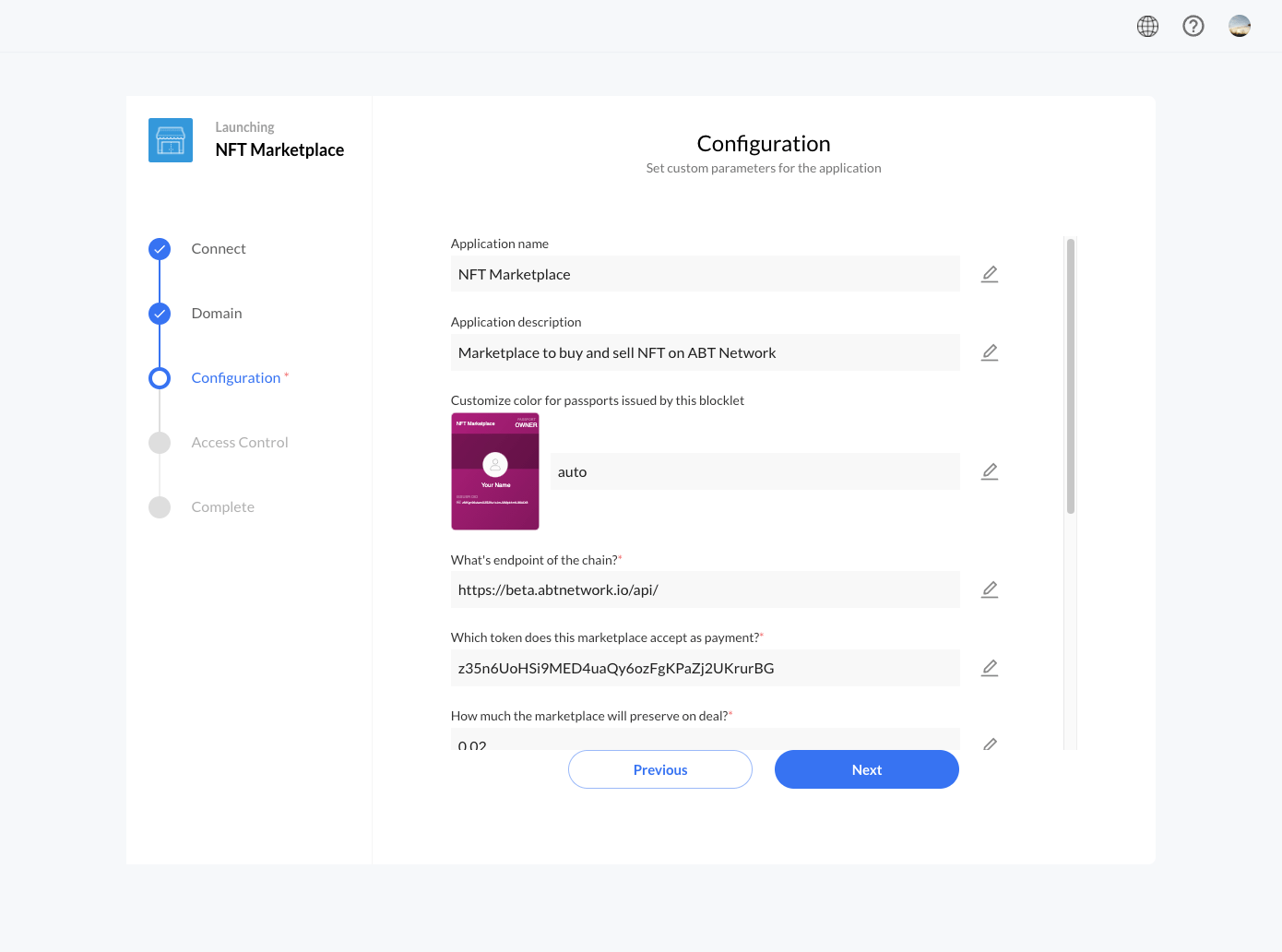 NFT Marketplace is an application for general users, so here select "Accessible to all". Then click "Next" and wait for the application to be ready. 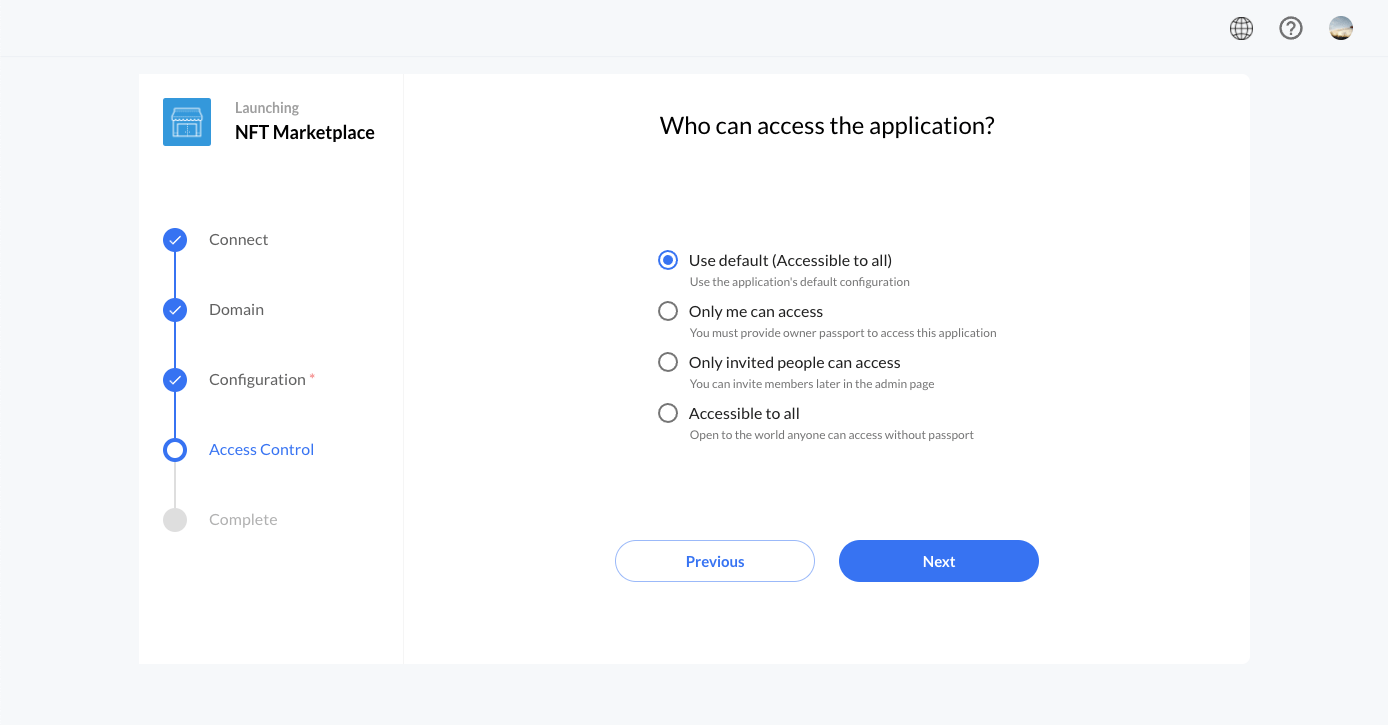 Once the application is launched, click the "Open" button to open the NFT Marketplace. 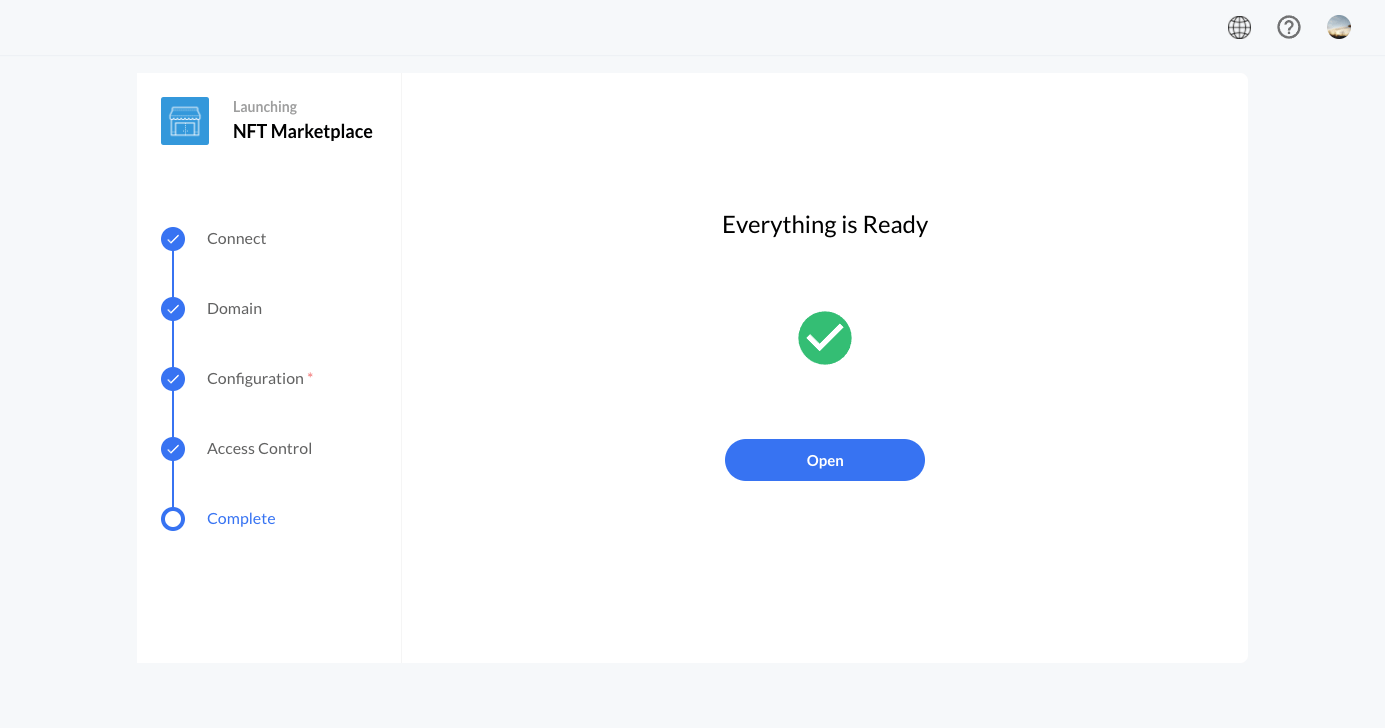 What the NFT market will look like when it starts:

Of course, this is empty right now and no user has posted NFT yet.

We have just purchased and launched an application for auctioning NFT using ABT through Blocklet Launcher. Blocklet Store also provides other Blocklets, so you can choose the blocklet you want to launch according to your actual needs.

In order for developers to get a financial return from developing and maintaining Blocklets, some Blocklets are not free. There is not much difference between launching an application based on a paid Blocklet and a free one, the only difference is that the Blocklet needs to be purchased during the launch process.