The technology enabling ArcBridge is “DID Rollup”.

DID Rollup is a kind of optimistic rollup utilizing the Decentralized Identity and Verifiable Credentials, the “rollup chain” is a virtual blockchain that lives within the two L1 blockchain it connects with. The current implementation of DID Rollup connects any blockchain with ArcBlock’s OCAP(Open Chain Access Protocol) and another EVM compatible blockchain.

We will release detailed technology specification and open source the DID Rollup implementation in the future.

The current implementation of ArcBridge is based on ArcBlock’s Blocklet technology, all ArcBridge nodes are Blocklets and run on Blocklet Servers. This allows a better decentralization, anyone who is interested in ArcBridge can run their own node effortlessly and trustlessly. They can either join a node to an existing bridge, or they can create their own bridge. 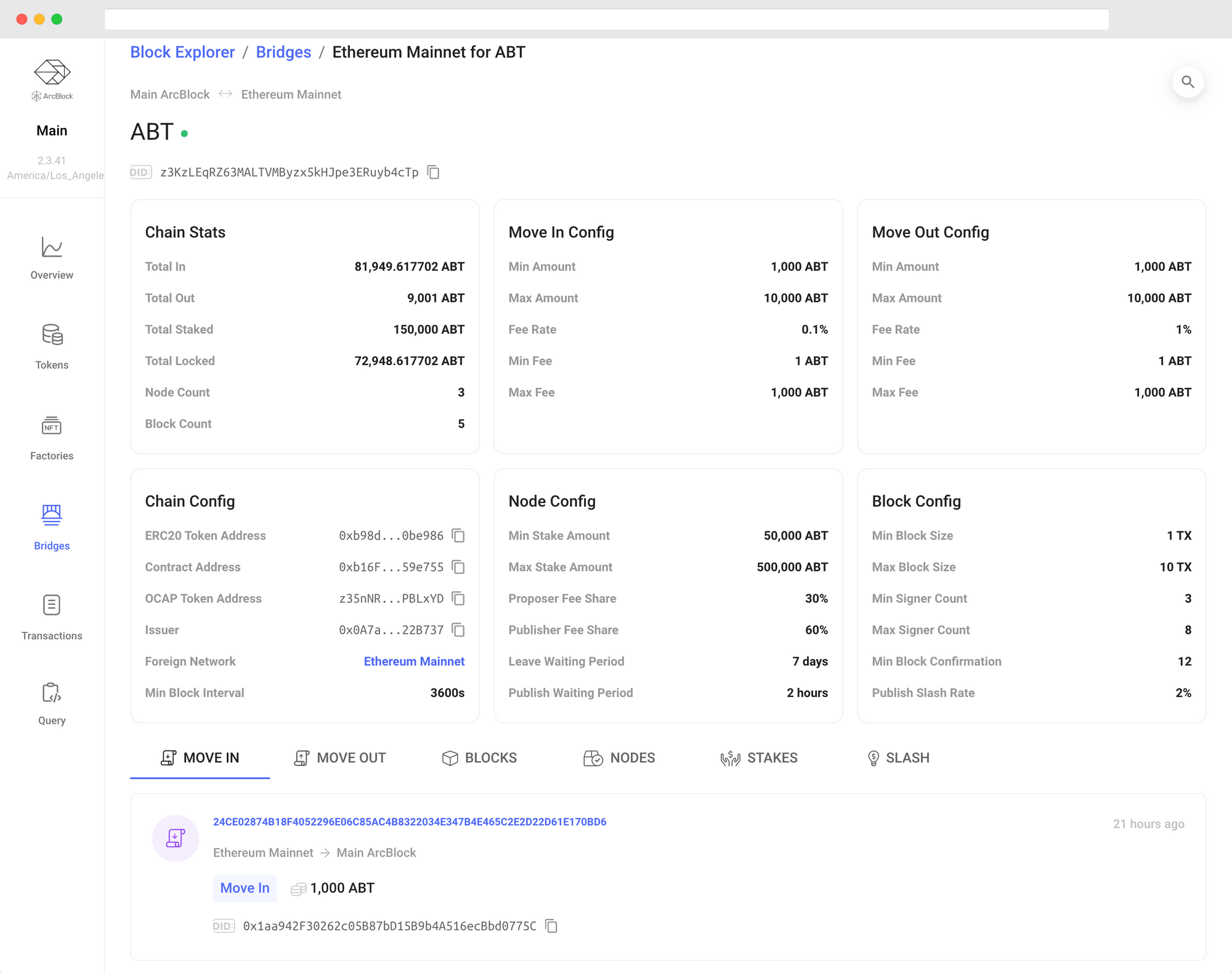 Currently, ArcBridge public beta is deployed with some limitations. For example, the maximum amount for each cross-chain transfer is at least 1000ABT and at most 10000ABT. Considering that the actual transactions will be relatively small, each rollup block only contains up to 10 transactions, so this will lead to a higher fee, and the protocol fee will also be affected by Ethereum's gas price. After the full production release in the future, those restrictions will be lifted, and hundreds of transactions can be included in each block, at which time the protocol fee will be affected by Ethereum gas price with little or no impact.

The transfer from Ethereum to ArcBlock is less than 10 minutes, depending on the Ethereum gas limit settings. The transfer from ArcBlock to Ethereum is usually within 30 minutes however it may take up to 24 hours to complete depending on Ethereum network and gas price. ArcBridge implemented a “Fast Withdraw” mode for users who are willing to pay an extra protocol fee in exchange for the fastest withdrawal.

ArcBridge is fully integrated with DID Wallet, so users use ArcBridge directly from their DID Wallet. The current DID Wallet in iOS AppStore and Google Play Store already supported the ArcBridge public beta. We are working on a new release DID Wallet which will have even better user experiences.

We encourage our users to try ArcBridge only with a small amount of the transfer, given it’s currently in the beta mode. The full release in production mode is set for the 1st quarter and aligns with the latest DID Wallet release.

Anyone can join ArcBridge as a Node

ArcBridge is fully permissionless and anyone can join ArcBridge as a Node.

Given current beta status, we only encourage users with technical background to join as a Node, but we will soon release step by step guide documents and improve the user experiences, so anyone can simply join the node directly from DID Wallet.