Get Started
ArcBlock Updates Platform with Release of ABT Node 1.0

ArcBlock Updates Platform with Release of ABT Node 1.0

ArcBlock has released ABT Node 1.0, The New Operating System For the Decentralized Web

ArcBlock has officially released ABT Node 1.0, it is a distributed computing operating system built for the decentralized web. With ABT Node, developers now have a powerful platform that gives them everything they need to create, deploy, and manage modern decentralized applications. ABT Node includes a flexible runtime and integrated framework that uses serverless computing and microservices architecture to reduce the complexity of building and running scalable blockchain applications anywhere and everywhere.

ABT Node is the first platform to fully integrate decentralized identity, blockchain framework and reusable software components known as Blocklets to make it easy to add new capabilities for any project. Users can one-click install apps, blockchains, developer tools, and more to enable them to deploy blockchain nodes, smart contracts, application logic, and more with zero hassle. 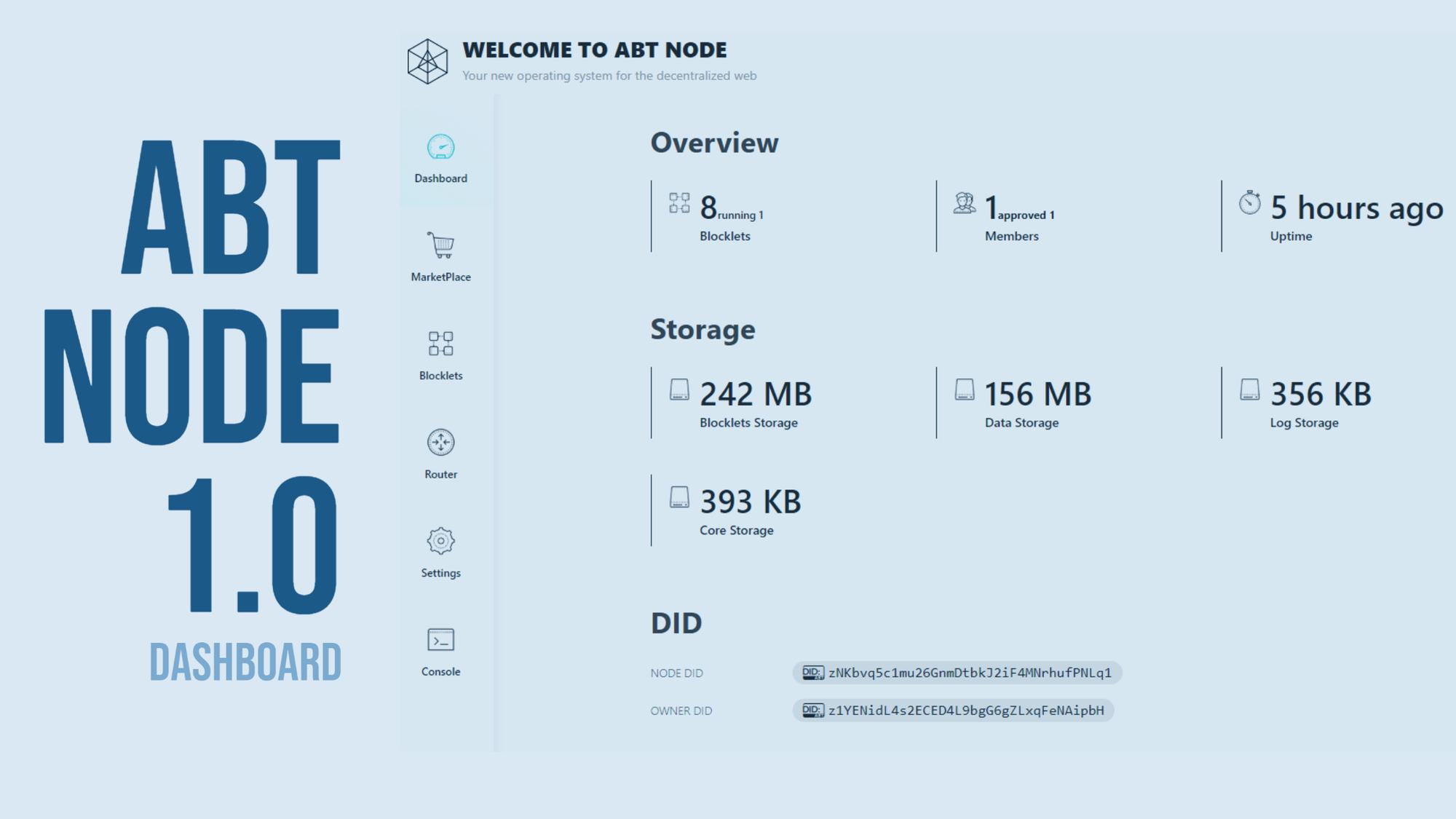 Starting today, ABT Node 1.0 is available on the Amazon Web Services marketplace By offering ABT Node on AWS, developers and teams get cloud-native building blocks to build and optimize their projects. ABT Node is a fully decentralized web node, hardened runtime, and directly integrates with other AWS services. Developers can find additional information about ABT Node here: https://docs.arcblock.io/en/abtnode/introduction/how-to-get-abtnode.

ABT Node is natively designed to host DApps, websites, decentralized services, and DeFi and includes a set of features and familiar software development kit (SDK) that gives developers and teams a better way to create, deploy, and manage their software.

Blocklets are software building blocks designed to run independently on the ABT Node or can be combined with other Blocklets to create new functionality for any project. Each Blocklet uses a serverless design and can easily run on any infrastructure. Starting today, users can one-click install core Blocklets to create and launch interconnected blockchains, a universal explorer, ArcBlock's did:connect identity service and Amazon Web Services Quantum Ledger Database. 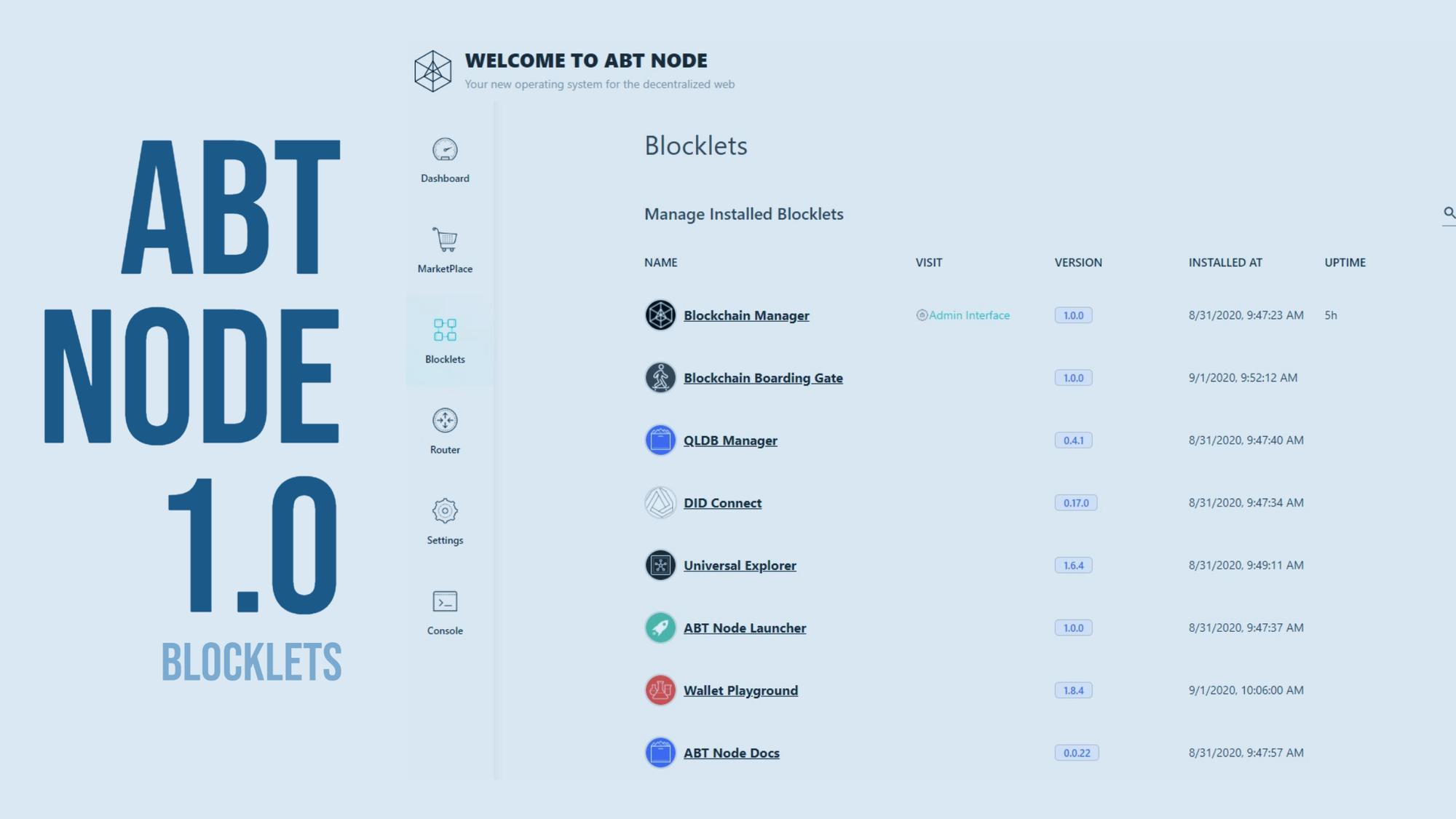 The new ABT Node Routing Engine is a powerful new component to let users create custom domain pathing for specific URLs and IP addresses, set reverse proxies, install SSL certificates, and set custom rules for each blocklet and service running on ABT Node.

ArcBlock's ABT Node 1.0 is the only production-ready blockchain platform that includes a built-in W3C DID compatible Decentralized Identity service. Developers and teams have instant access to tools, libraries, and reusable components to make it easy to create and use digital identities rooted in ArcBlock's blockchains. Unlike other platforms, any decentralized identity created is automatically interoperable across all ArcBlock created networks, applications, and services. Developers can also deploy ArcBlock's did:connect Blocklet from the marketplace to run their own decentralized identity authentication service with no external or 3rd party dependencies.

ABT Node is the new OS of the decentralized web. Developers have a new way to create, deploy, and manage DApps and blockchains that significantly reduces the effort and time needed to build and deploy apps and blockchains. To learn more about ABT Node, or to get help with your project, visit https://www.arcblock.io.

ArcBlock is transforming how blockchain-enabled applications and services are developed, managed, and deployed by reimaging how these services will be created in the years ahead. ArcBlock comprises a team of industry experts, developers, technologists, and leaders who are focused on creating successful outcomes by enabling teams and businesses to develop blockchain-ready services around their needs. ArcBlock has created a powerful but easy-to-use development platform that utilizes blockchain's power in combination with cloud computing that allows developers and businesses to achieve their goals successfully. Follow ArcBlock on Twitter @arcblock_io.