Get Started
A Guide to Create a Blockchain on ABT Node

A Guide to Create a Blockchain on ABT Node

Deploying a new blockchain using ArcBlock's new ABT Node is as simple as a few clicks. Before we get started let's first understand why ABT Node is a game-changer for developers and how it makes creating and deploying blockchains easy.

The new ABT Node is the foundation of the ArcBlock Platform and is the easiest way for developers to create, deploy, and manage blockchains and decentralized applications.

Out of the box, ABT Node includes these core features:

ABT Node includes several deployment options including deploying your node from the AWS Marketplace or running it locally on your device.

You can deploy ABT Node from the AWS Marketplace following the steps listed here.

Deploy ABT Node on your device

For this exmaple, let's go ahead and setup ABT Node locally on your laptop/desktop.

Once you have completed the steps, you should see your available URL in your terminal window similar to the example below. Enter it into your browser: 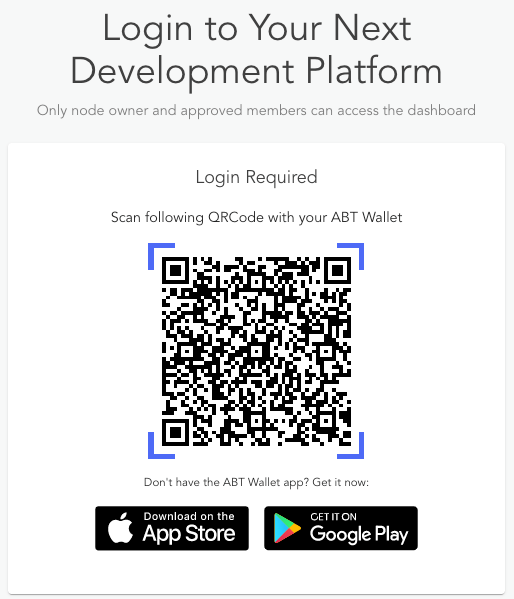 Go ahead and enter the name of your node and finish the steps.

Upon logging in to your ABT Node you will be taken to the main dashboard view. In this view, you can see basic information about your node including storage, your node and owner DID addresses and an overview of running blocklets, team members and more. 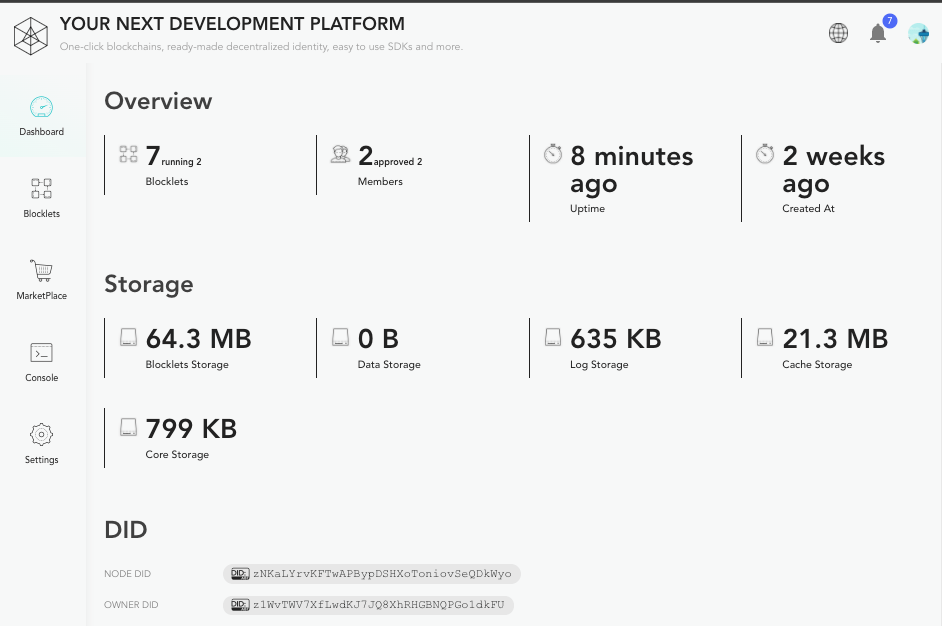 For this example, we want to create and deploy our first blockchain in the ABT Node. As a first step, let's go to the marketplace located on the left-hand action bar. 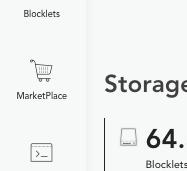 The marketplace is where you can find and install Blocklets. If you remember from our description earlier, Blocklets can be stand-alone apps, reusable components, or smart contracts that allow us to extend the functionality of our ABT Node. For this tutorial, let's find the Blocklet named Blockchain Manager and install it. By default, the latest version of the Blocklet will be installed. 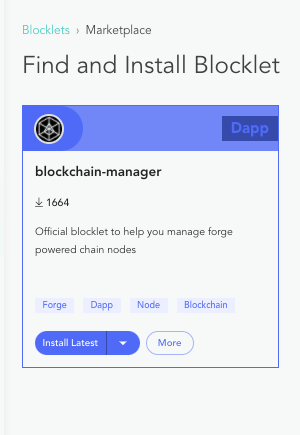 By installing the Blockchain Manager your ABT Node now supports the ability to one-click create, deploy and manage blockchains inside of the ABT Node. Once it is done installing, select the open button.

After selecting open you will be taken to the Blockchain Manager overview page. In this area, we can see all the details about our blocklet including details such as name, version, DID address, and more. You will also see some other tabs that allows you to view additional details about your blockchain manager blocklet.

On this tab, you can see details about data and directories. 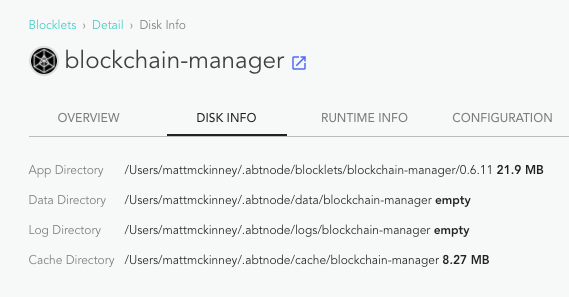 The Runtime tab will show you details about your blocklet once it has been started including details such as time running, uptime and so on.

The configuration tab includes key information about your blocklet including port, directory, based URL and more. Be sure to look over this page to familiarize yourself with it. 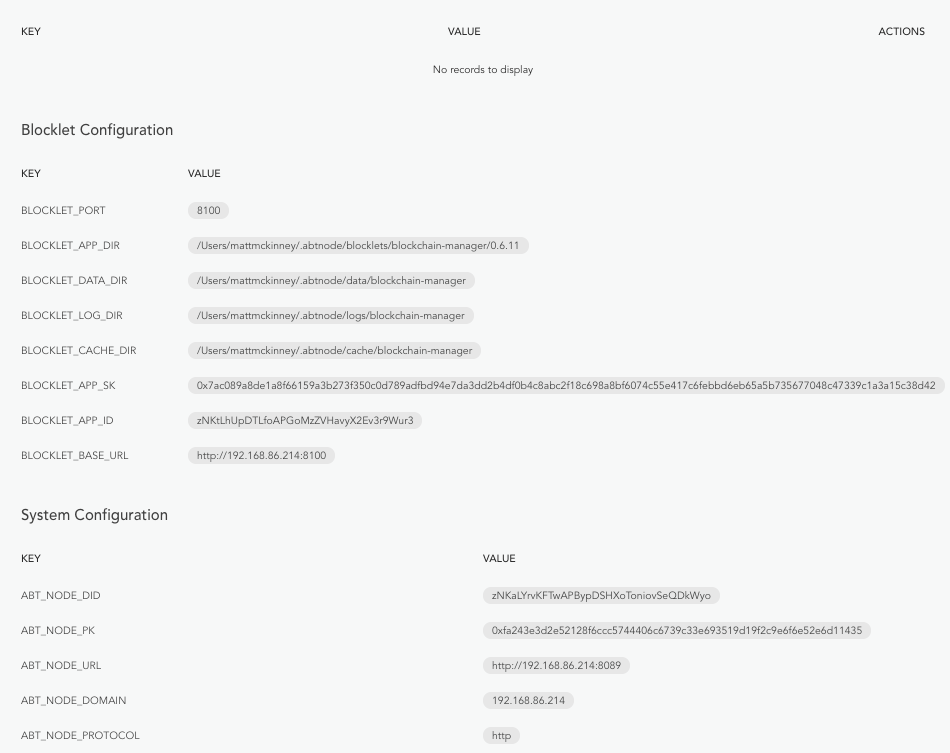 In order to create our first blockchain, we need to first start the blocklet. On the top right corner, press start to enable the blocklet to run.

After you press start, you will now see some new information on your overview tab. You can verify that your blocklet is running and a new Admin Inteface link. Let's click on the new link. 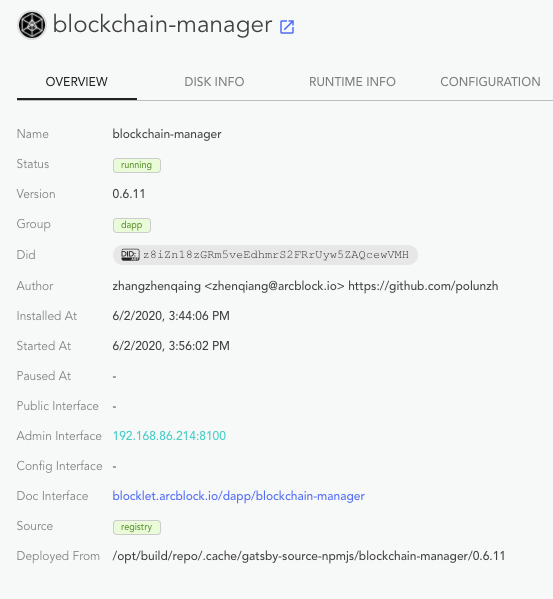 The new Admin Interface takes you to the new Create Chain interface. As a first time visitor, you will see that your blockchain manager currently has No chains. Let's go ahead and select Create Chain.

When you select to create a new blockchain you have the choice of creating a new blockchain using a simple version or more advanced version that increases the available customization options you have when creating your chain. For the purposes of this example, we are going to use the simple view and the included defaults such as total tokens available on the blockchain and number of decimal places. Let's begin. 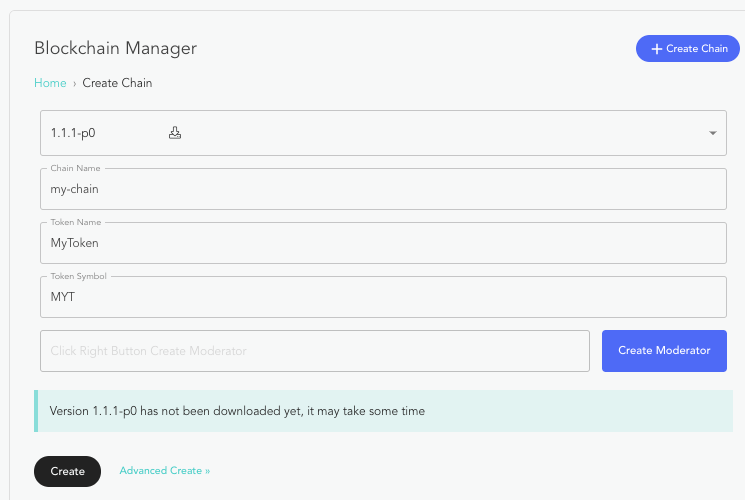 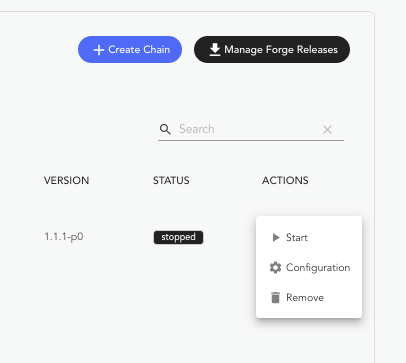 By now, your new blockchain is up and running. On the view and manage blockchain window click on mytestchain on the left-hand side. This will take you to the updated overview area for your blockchain. As you can see now, the blockchain is running and you have new Forge gRRC and Forge GQL Endpoints. 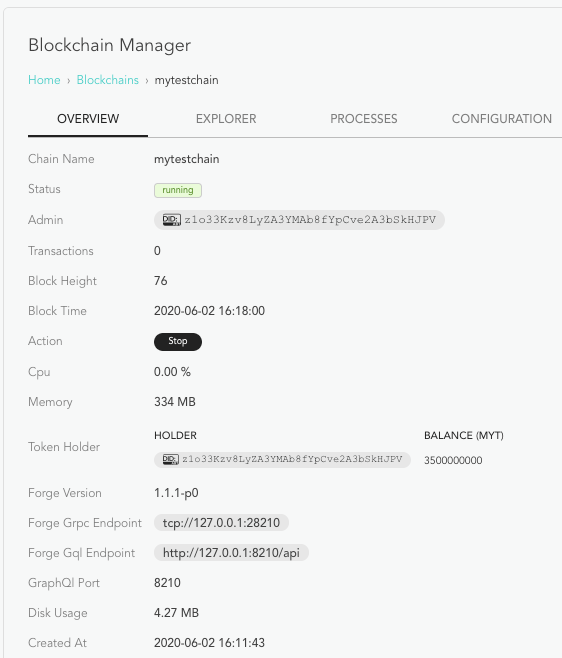 If you select the processes tab you can see some details about your chain including the usage of CPU, Memory and Uptime for your different processes. 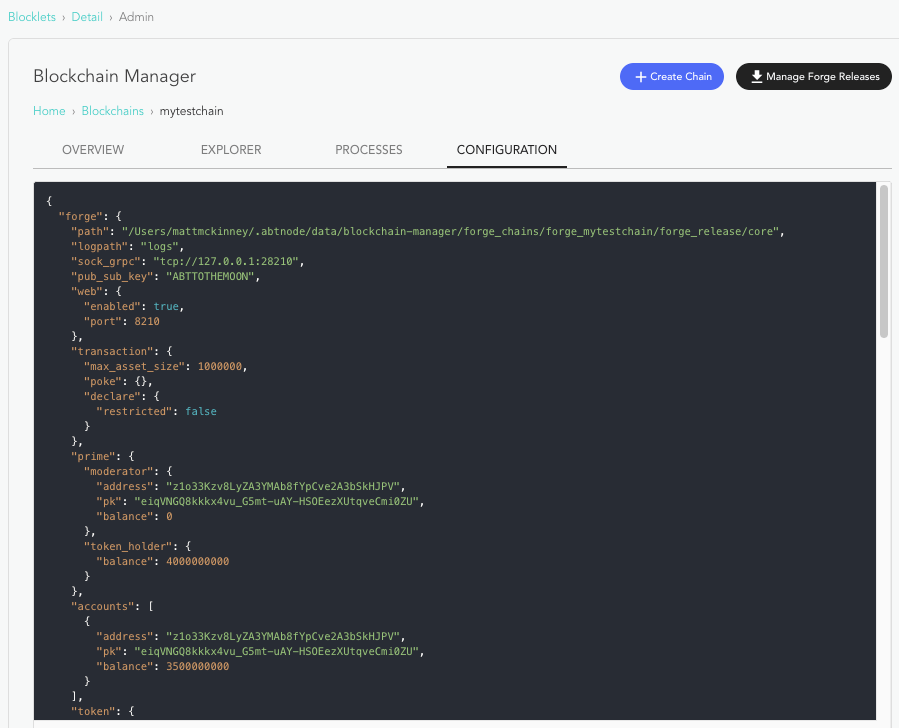 No blockchain would be complete without a blockchain explorer for your new chain. If you select Explorer on the navigation you will see that your new chain gives a powerful, but easy to understand dashboard view of your blockchain. 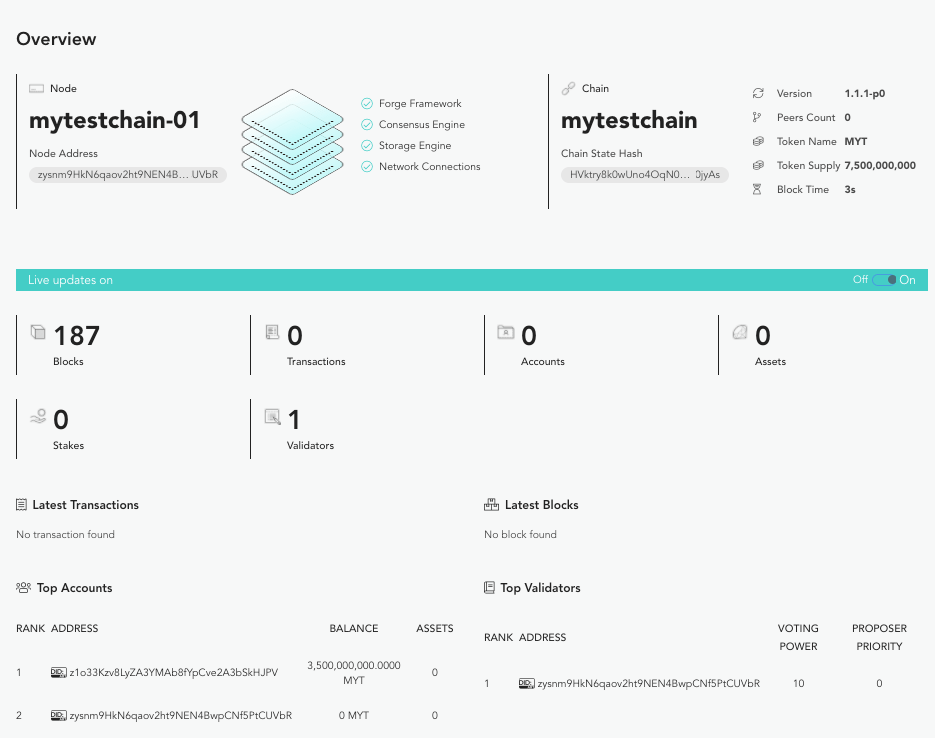 In this view, you can see the number of blocks generated on your chain, transactions, validators and more. In addition, you can see top account holders including our previously created moderator address and token balance from when we created the chain. On the action bar located on the left-hand side, you will also see some additional options and views for your blockchain.

Our new blockchain has been created and deployed successfully. Let's go back to the Blocklets section to see the current status. Select Blocklets on the left-hand action bar and now we can see that our Blockchain Manager blocklet is running and there is now an available Admin Interface and Doc Interface available to us.

What's next is up to you. You can go and build another blockchain or try installing another blocklet to add more functionality to your ABT Node. Check out our Managing ArcBlock Blocklets overview to help get started with Blocklets.