ArcBlock makes it easy to extend the functionality of your ABT Node by installing and deploying developer-ready blocklets.

Welcome to getting started with ArcBlock Blocklets. If you haven't already, you will need to launch ABT Node and connect it to your decentralized identity wallet ABT Wallet. In doing so, you will secure the node and your node access keys will be stored in your wallet.

Increase the power of your ABT Node through Blocklets

The features that ABT Node includes out-of-the-box are just the start. ArcBlock Blocklets let you add components (such as tools, services, features) to your installation to support your development workflow. ABT Node has a rich extensibility model that lets blocklet authors plug directly into the ABT Node UI and contribute functionality through the same APIs used by ABT Node. This article explains how to find, install and manage ArcBlock Blocklets from the ABT Node Marketplace.

After you have installed and set up your ABT Node, you can browse and install Blocklets from within ABT Node. Bring up the Blocklets view by click on the marketplace icon on the activity bar on the left side. 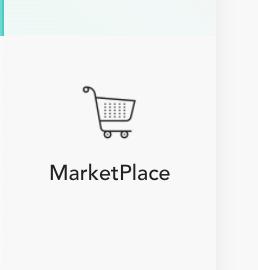 Now, you will see a list of available Blocklets on the ABT Node marketplace. 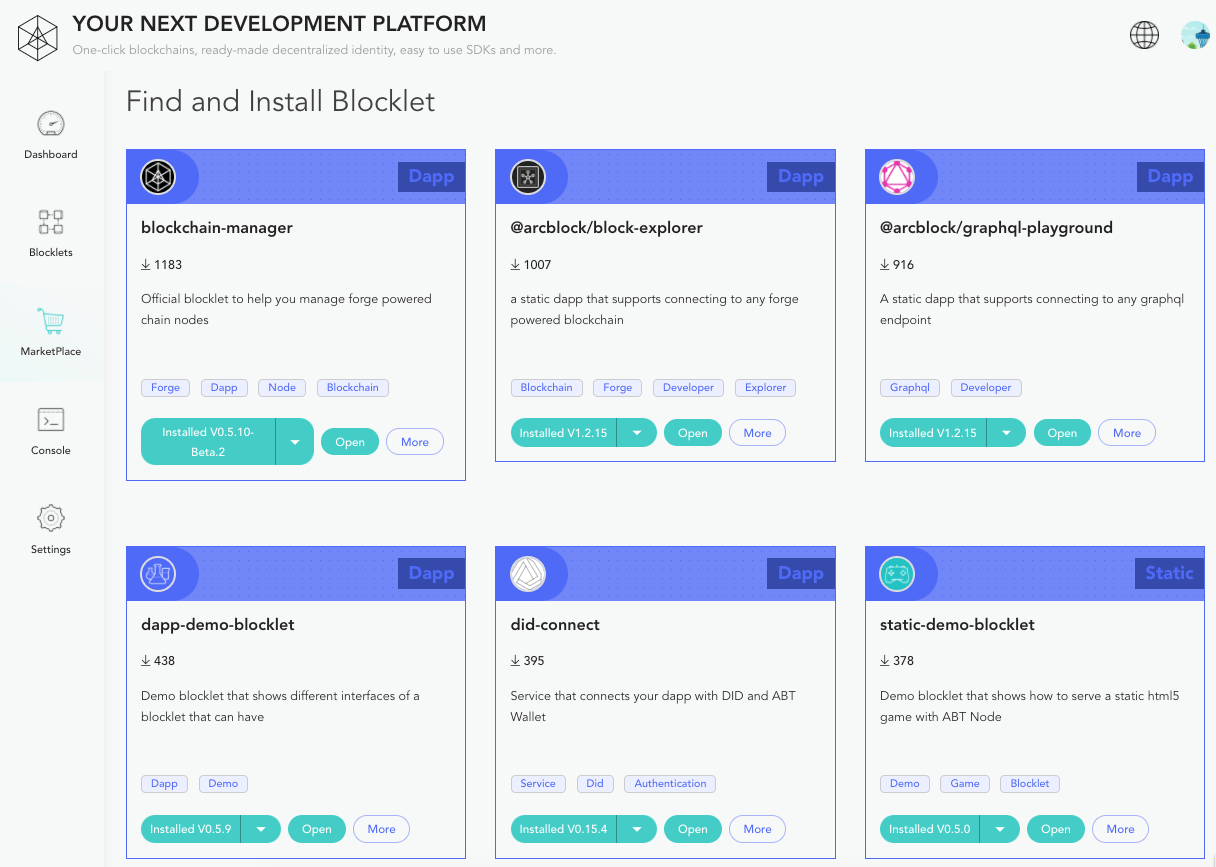 Each Blocklet in the list will include a brief description, the publisher, the download count and a rating if available. You can click on the more button in the Blocklet product box to display the Blocklet's detail page where you can learn more.

When reviewing the available Blocklets, if you select the more button you will be taken to the ArcBlock website and will view a Blocklet overview page. For example, if you select more on for the Blockchain Manager Blocklet, you will be taken to page shown the screenshot below. Once there, you can read the Blocklet's README, as well as a desription on the type of Blocklet you are installing. ArcBlock's Blocklet framework supports a variety of Blocklet types including Starters, Dapps, and Static. Each type enables developers to extend their ABT Node, or easily start a new application or website. We will share new details in the future. 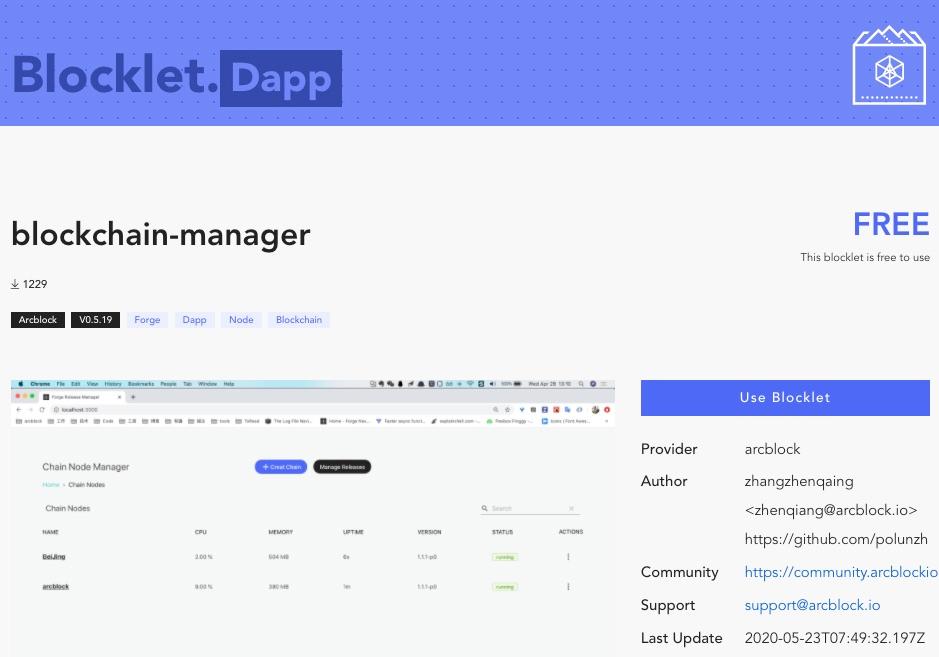 In addition, this page will include the Provider, Author, where to get support, and the most recent updates. If the Blocklet has additional dependencies, or requirements, the page will detail what packages will be installed with the Blocklet.

In some cases, developer may also create Blocklet Packs, which are bundled Blocklets that are combined together to create a new feature or capability for your use. For Packs you will see details on what is included.

ABT Node makes it easy to manage your Blocklets. You can install, disable, update, rollback or uninstall Blocklets through ABT Node.

Once your Blocklet is installed, you will see an open button to go into the Blocklet management screens, as well as a more button that takes you to the detail page.

Once you have installed your Blocklet, you may need to perform configuration and/or start the blocklet in order to add the new functionality to the ABT Node. In the example below, you can see the recently installed Blocklet is currently in stop status.

You can use the same menus to also stop, restart or stop your blocklet anytime.

To see a current list of any running or stopped Blocklets, you simply need to click on the Blocklets icon in the action menu on the left-hand side. 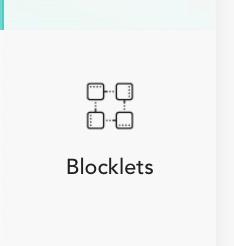 Once there, you will see a list of your currently installed blocklets that includes the name, version, when it was installed, uptime and status.

You will also see available actions on the right-hand side that allow you to perform actions such as Blocket: start, stop, remove and config. 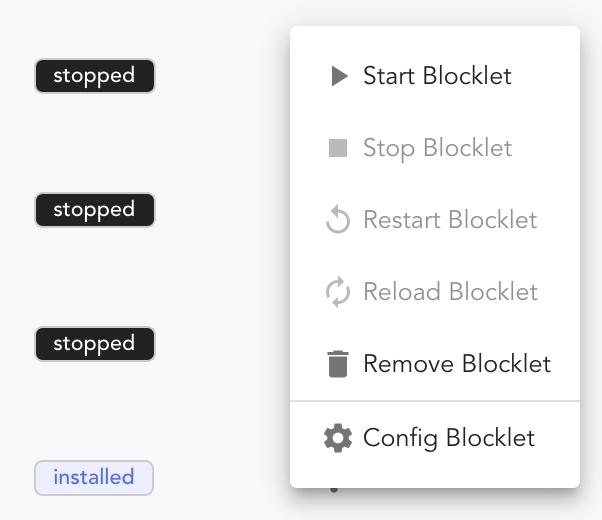 Every Blocklet includes a detailed overview that will provide you with key details about the Blocklet including an overview, disk info, runtime info and configuration. 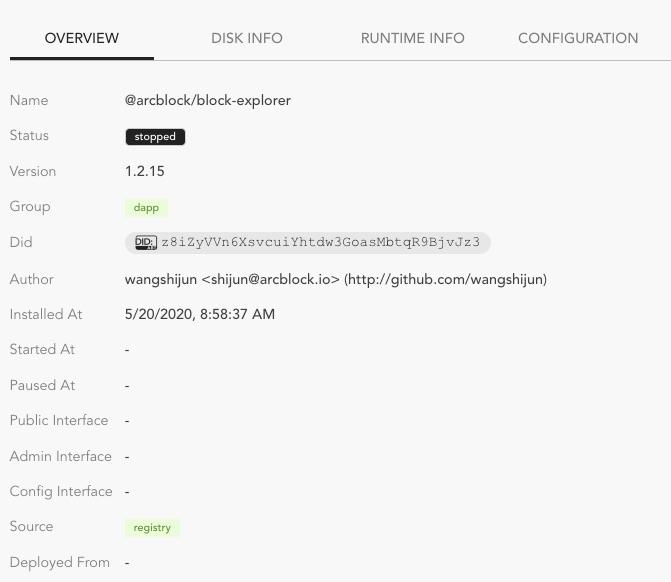 The overview section includes key details about your Blocklet including the name, status, it's DID address, public interface, admin interface and config interface.

You will see your Blocklets system configuration details that include important details that developers may need to use including port, app directory, ABT Node URL, and ABT Node Domain. 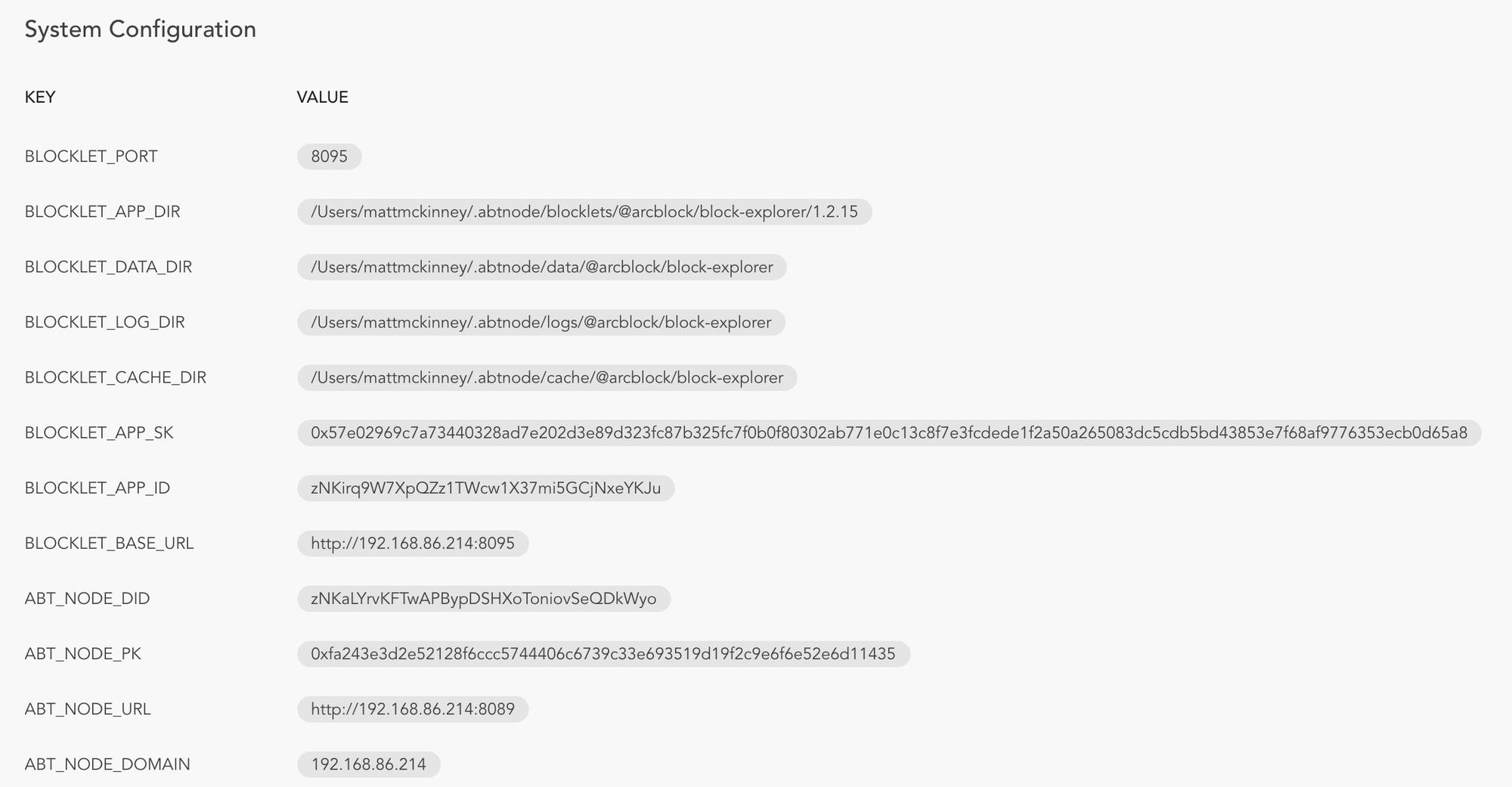 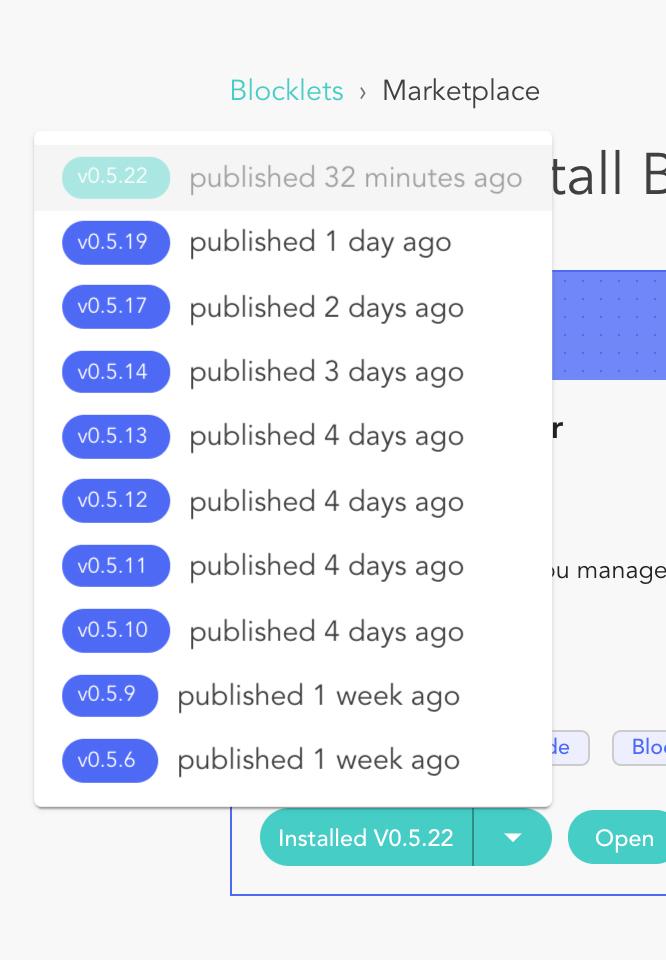 In the event, you want to rollback to an older version, simply select the one you want and you will the option to downgrade to the selected version. You can confirm the change by clicking on the button. 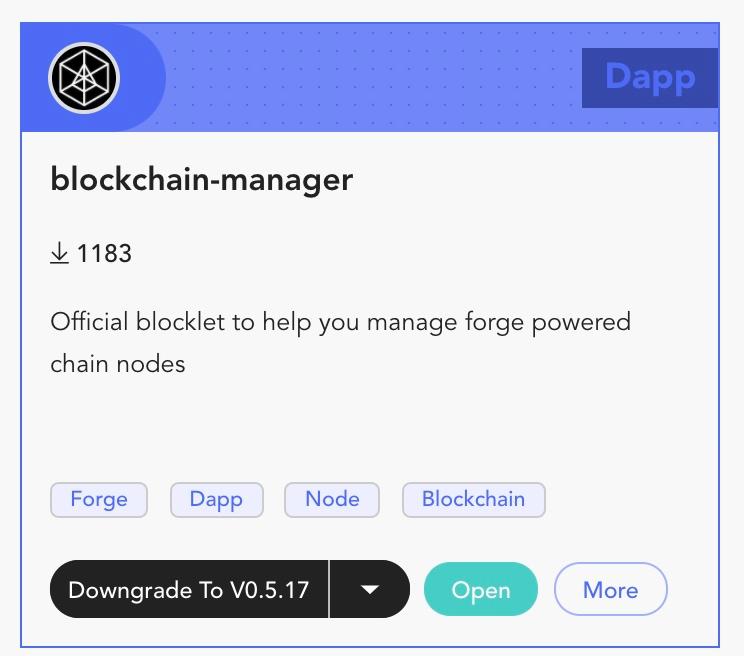 ArcBlock will release Blocklet command line management in the near future to make it easier for developers to automate and configure ABT Node and Blocklets.

You can view system configuration details in the configuration section under each blocklet. When a Blocklet is installed, in this case the example being ArcBlock's Block Explorer Blocklet, the app directory will be similar to the following: