Get Started
Network is the future of Blockchain and DApp Interoperability

Network is the future of Blockchain and DApp Interoperability

Interoperability is the future of blockchain

With the rapid progression of blockchain, the early adopters like Ethereum and Bitcoin quickly built their networks in a way that disregarded the need for interoperability and instead focused on trying to create a platform that ruled them all. Ethereum, for example, was focused on building the world supercomputer. However, due to design decisions along the way, it is now apparent that this approach wasn’t necessarily the correct one. On the Ethereum network, you can get roughly 10 to 30 transactions per second and this is limited by their Proof of Work bottleneck that includes the limitations of dispersing transactions across the network. Separately, Ethereum forces use of their network creating an unnecessary problem that focused app designers and developers to build an inefficient and complex app that isn’t based on their specific use case, but rather it is based on what Ethereum tells them.

Because of this, many companies today are attempting to fix the scalability issue using sharding or side chains. However, even with these improvements, other issues have now shown themselves. Whether it the need for specialized coding skills, non-existent user experiences, or increasingly complex and expensive systems to run. Because of this, a new type of blockchain network has arisen one that solves the scalability issue and makes it significantly easier to build and maintain a blockchain that is built around a specific application requirement or use case. 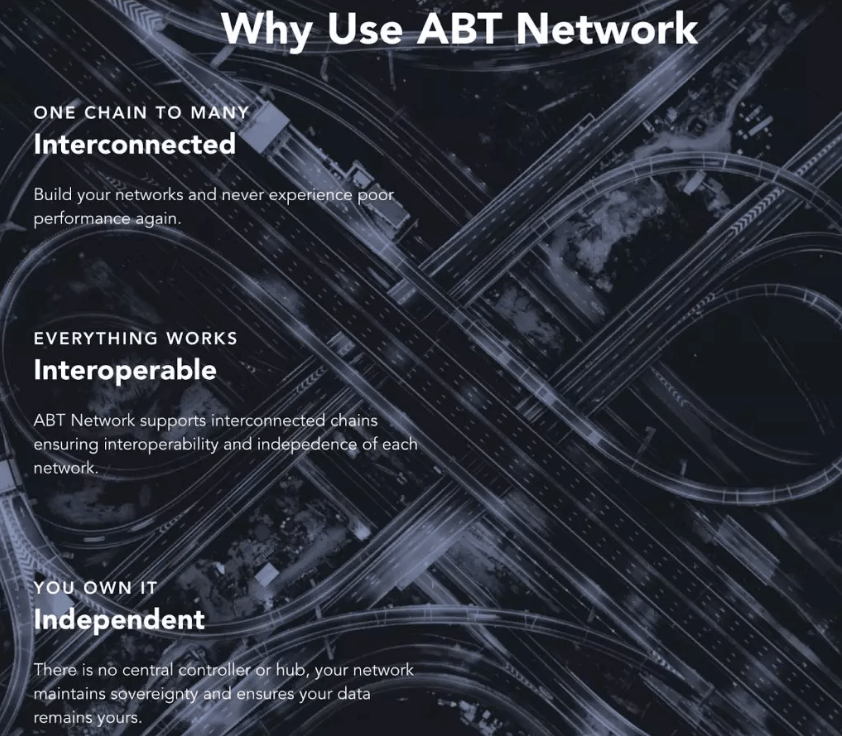 The network was first released on March 2019 along with the Forge SDK and ArcBlock’s decentralized identity wallet. A feature that sets ABT Network apart from other interoperability networks such as Cosmos and Polkadot is the emphasis usability. Unlike other networks, ArcBlock decided to approach their network by not only considering the issue of scalability but also the user themselves. ABT Network is highly scalable, can support thousands of chains, but more importantly, ArcBlock created a network where everything has its own ID and can work securely through the entire network. Whether it is assets, users, or tokens decentralized identity works anywhere and everyone.

To make it work, ArcBlock developers have created specific endpoints in the ABT Network to communicate with existing offline data (data not on the blockchain), a feature not seen in many of the top blockchains. This isn’t to say that ABT Network has left the new economy behind. Using Forge SDK and the ABT Wallet, developers can create amazing decentralized apps (DApps). ArcBlock has created a complete end-to-end experience that supports developers and users ensuring that developers have the tools and services they need to build DApps easily, but also ensures that users can use anything running on the ABT Network easily.

But Why the Future?

But what really makes ABT Network the future of blockchain and the contender to lead blockchain 3.0 is the developer friendliness.

Other blockchains are focussed on building a faster blockchain, but they have ignored the fundamental aspect of being developer ready. Take, for example, Cosmos network. Currently valued at $738 million,the SDK is limited to blockchain development only. That means developers cannot create DApps on the network yet. Developers have to juggle through multiple frameworks to run DApps on the Cosmos network.

Being developer-friendly is one of the most fundamental aspects of any blockchain. If developers are not able to create an application on a specific blockchain, that blockchain will slowly go away due to the lack of use.

And ArcBlock knows this. From the start, ArcBlock has provided a suite of tools for developers from all levels to use the full power of the ABTNetwork. Technologies such as Forge SDK, Open Access Protocol, and ABT Wallet allow developer from almost all levels of experience to dive in and experiment in the wonderful world of blockchain.