The concept of web frameworks was the single most influential technology in the advancement of the internet. Web Frameworks reduced the time it took to develop a website and empowered millions of developers to create complex web apps. For example. Ruby on Rails reinvented how web applications get built by giving developers everything they needed to build web apps simply and easily. Today, some of the most popular websites such as Netflix, Instagram, Twitter, Quora all run on Web Frameworks.

ArcBlock, a leading blockchain platform knows how important web frameworks are and has created a similar framework just for the blockchain industry. The new Framework is called the Forge SDK and allows developers to easily create and deploy DApps and custom blockchains.

The Forge SDK is a next-generation blockchain application development framework and according to them is the easiest way for developers to create their customized Blockchains and build decentralized applications on it.

The idea behind Forge was to give developers the ability to build applications using the models they are familiar with and giving them the tools and services needed to build these next-generation decentralized applications. The current web application model has been successful for more than 20-years and ArcBlock appears to be the first to model their blockchain platform using web apps as their guide.

This graphic represents ArcBlock’s core services and anyone who is familiar with developing web applications can quickly see the similarities. 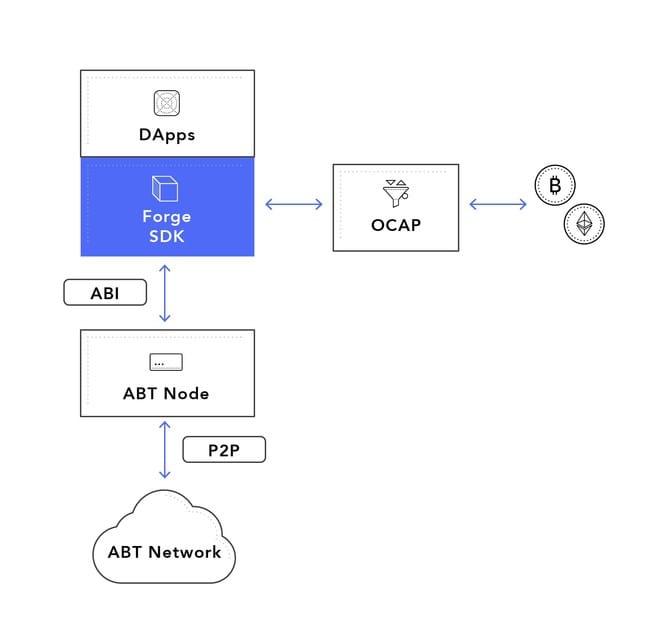 Like Ruby on Rails, the goal of Forge is to remove much of the complexity, and limitations of today’s existing blockchain development platforms, and put the power back into developer’s hands by letting them do what they do best – write code – and Forge will do the rest.

ArcBlock’s USP is interoperability and the Forge SDK incorporates this philosophy. The SDK is designed to be flexible, so that latest blockchain improvements can be incorporated. Moreover, developers can leverage the power of other blockchains such as Ethereum and Bitcoin network through ArcBlock’s Open Chain Access Protocol (OCAP).

According to Tyr Chen, VP of Engineering at ArcBlock,

“With Forge SDK, you can easily build your own blockchains, or easily connect to public blockchains like Hyperledger or Ethereum. Our vision for Forge is to have our framework play a key role in helping developers build a decentralized world by giving them the building blocks to simply build their own blockchains without the lock-in or complexity,”

Disclaimer: Blockmanity is a news portal and does not provide any financial advice. Blockmanity's role is to inform the cryptocurrency and blockchain community about what's going on in this space. Please do your own due diligence before making any investment. Blockmanity won't be responsible for any loss of funds.