Get Started
War of Blockchain Interoperability: Cosmos vs ArcBlock vs Polkadot

War of Blockchain Interoperability: Cosmos vs ArcBlock vs Polkadot

Interoperability is the future of blockchain

Interoperability is the future. That is not our quote, but rather by Ethereum’s founder Vitalik Buterin. When it comes to interoperability three blockchains look to rule the market. Cosmos, ArcBlock, and Polkadot.

All three achieve the same end goal of interoperability but each of them has a different approach than the rest. One focuses on the speed while others focus on security and decentralization.

Although articles have been written on Cosmos and Polkadot, what we want to focus is on the most recent entrant into the interconnected blockchain space ArcBlock which has found a balance between speed, developer friendly and security.

Before we begin, let us understand what Blockchain Interoperability is.

Cosmos, ArcBlock, and Polkadot all utilize interconnected blockchains where a developer creates a new custom blockchain for every application or usage that they require. Today, if you look at ArcBlock’s universal explorer you can already see there are multiple blockchains available on their network – Argon, Bromine, and Titanium. These new interconnected blockchains solve many of today’s existing scalability problems with blockchain by allowing anyone to build their own chain and can be confident that there will chain will be to interact with others seamlessly.

Blockchain interoperability allows for the exchange of information/tokens between multiple blockchains without a need for centralized third parties. Interoperability is a major piece of the puzzle for humanity’s quest towards a total decentralized internet.

It’s important to note that we are beginning to see other legacy blockchain platforms attempting to copy the interconnected chain model like Ontology who recognize the potential benefits to developers and app users.

Cosmos vs Polkadot vs ArcBlock

Team Both Cosmos and Polkadot are working on the development of the interoperability protocol in an efficient manner. Both the projects are run by existing development teams – Tendermint for Cosmos, Parity (yes the Ethereum’s one) team for Polkadot.

ArcBlock has its own development team affiliated with only the ArcBlock project.

Working Cosmos works through a Hub & Zone model. Hubs are special chains on the cosmos protocol that connect with other chains. If Bitcoin wanted to communicate with Ethereum, they would send the asset to a hub which will route the asset to Ethereum blockchain. Each blockchain connected to a “Hub” is called a Zone. In the above example, both Ethereum and Bitcoin are zone. There can be many hubs which can interact with each other.

ArcBlock extends on the model of Cosmos to allow for business logic to be processed through interoperability. There are no central controllers and each chain operates independently of the others while being able to interact with other chains through ArcBlock’s relay less bridge minimizing requirements on other chains or hubs.

Cosmos’s scope is limited to asset transfer only currently. That means one can easily exchange assets between blockchain without a third party.

Polkadot is more focussed on inter-parachain messaging. Other blockchains can communicate via Parachains. According to developers, Polkadot will support both Asset transfer and information transfer through smart contracts.

ArcBlock is focused on business logic based on-chain and off-chain message transfer. ArcBlock allows for data from real-world to interact with multiple blockchains. That is they can support Asset Transfer, information transfer as well as business logic transfer.

All three Cosmos, ArcBlock and Polkadot have their own SDK which allows developers to leverage the power of blockchain.

ArcBlock’s SDK, aka Forge SDK, is a suite of developers tools which allows the creation of new blockchains as well as Decentralized Applications. The biggest advantage of Forge SDK is the comprehensive documentation and support for multiple languages including Python, Java/Javascript, Erlang, iOS, Android and more. Moreover, ArcBlock provides a starter kit to help developers build their first DApps in just a few minutes.

Polkadot is currently still in a development stage.

Cosmos has been released and can be tested by the developers.

Polkadot is still in the development phase.

ArcBlock has been released and can be tested by developers.

Cosmos has a good interoperability functionality but the scope is quite limited. The biggest application you can create on Cosmos is a decentralized exchange.

ArcBlock, on the other hand, is quite versatile and can be extended for various business logic.

Polkadot, on the other hand, hasn’t been released. 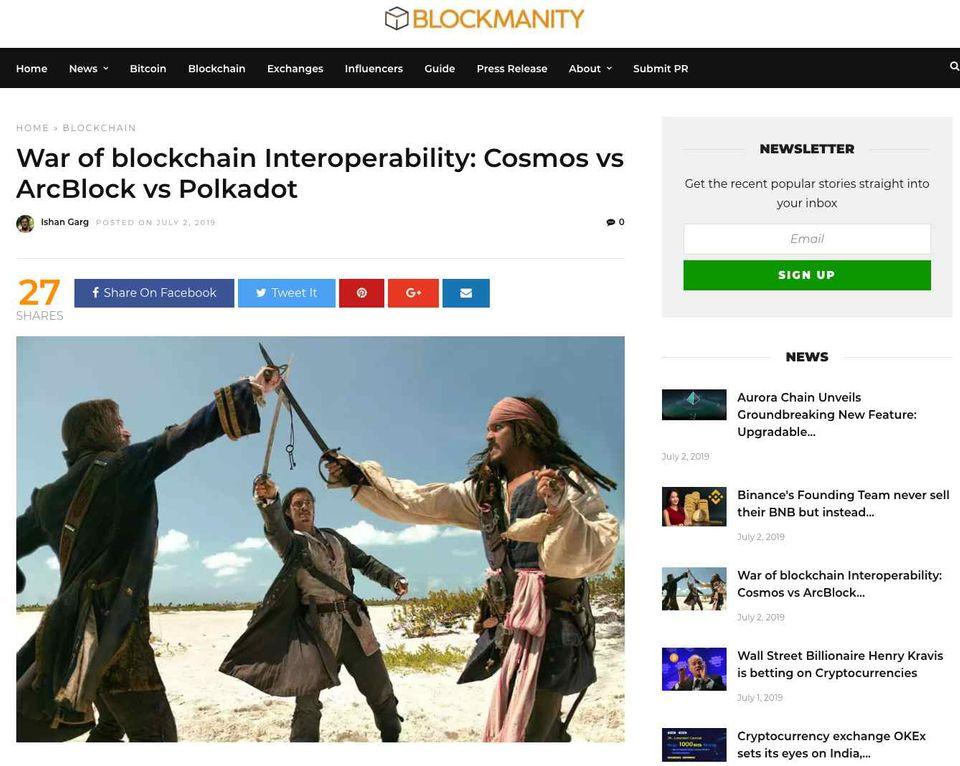 Link: War of blockchain Interoperability: Cosmos vs ArcBlock vs Polkadot