On June 4th, 2019 ArcBlock joined Coin98 for a live AMA event to support their global and local Vietnam followers and to discuss the current state of the ArcBlock project, what's changed since the ICO, and where ArcBlock is going in the future. The AMA event was led by Grace Pham from Coin98 and was live from 8:00 AM PST to 9 AM PST on Facebook at https://www.facebook.com/groups/Coin98.Net/permalink/1369451653207917/. 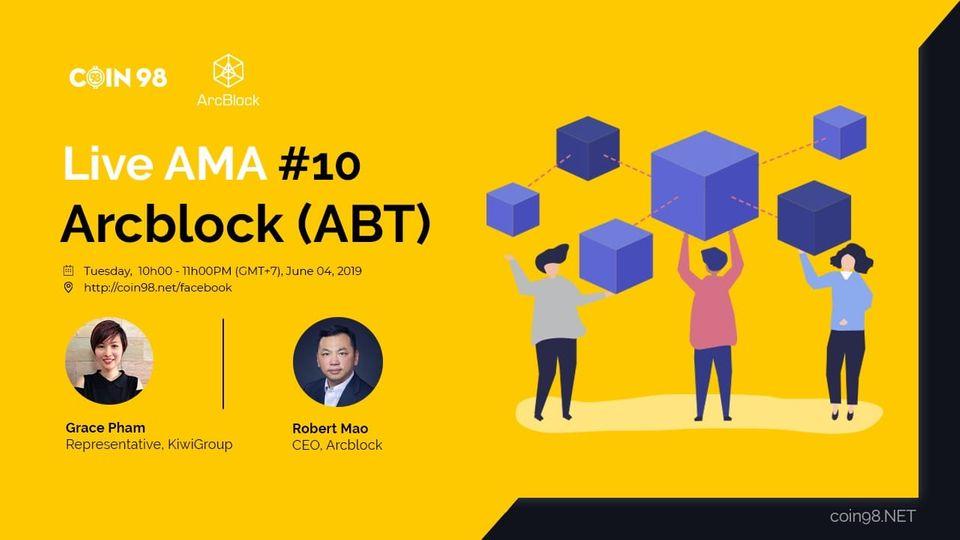 Moderator: ArcBlock is one of the most outstanding ICO and received a lot of interest from crypto Vietnam community in 2018. Since ArcBlock’s ICO in January of 2018, the project has continued to thrive despite the overall blockchain market entering a bear market. Today, we can learn more about ArcBlock and see if the project is still worth investing again once again? To help us find the answer we have invited 2 representatives from the ArcBlock project to attend Coin98’s ask me anything (AMA) session today:

Moderator: Thank you very much for being with us today.

Robert: Hello, everyone! It’s my pleasure to be here! Thanks Coin98 for the organizing !

Moderator: It's 10:00 Pm. Let's begin the show, but before we start could you please give us a quick intro and how you became involved in ArcBlock?

Robert: Thanks, everyone. I am the founder & CEO of ArcBlock. I started my blockchain journey a while before I started ArcBlock. During my past experiments with Bitcoin and Etherum, I realized there is a need of an easy to use development platform that make developers easier, and a need of a way to extend and interconnect blockchains together. That's how we turned out building ArcBlock.

Question: How do you define Blockchain 3.0?

Question: As a service blockchain, Who are ArcBlock customers?

Robert: We generate revenue in two major ways: 1. for traditional enterprise users, they pay for the software license or technical support. 2. for people who developed for ArcBlock ecosystem, we generate revenue by operation the ABT Network (https://abtnetwork.io).

Question: Who are ArcBlock's competitors?

Robert: Blockchain is still early, not enough players in the market, esp. the platform players. There are other companies doing similar things, but none of them doing exactly the same. e.g. Cosmos,Polkadot probably is competitors of our Forge Framework & SDK. They both in the space of "Inter-connected blockchain". Blockstack recently pivoted to promote their DID solution and app platform, they might become competitors of our DID. We focus on our products and customers rather than what's our competitors.

Question: As I know, Cosmos launched their mainnet and ArcBlock haven't. what make you think ArcBlock can compete Cosmos?

Jean: We launched our ABT Network on March 29th. Here is the press release for your information: https://www.arcblock.io/en/post/2019/03/29/abt-network-launch

Response: Oh I see, but it seem like lack of activity on the network right. ArcBlock and you're not answers my question what make you think to compete with cosmos?

Jean: Here is the comparison for your reference.

Response: I understand, but I mean what make you think you can defeated cosmos? Is it possible? Because Cosmos is popular than ArcBlock currently.

Jean: We compete with each other, not defeat for there is huge blue sea market for us.

Question: As I know, ArcBlock building ABT Chain, so What is ABT Chain Consensus Algorithm?

Robert: ABT Blockchain is now using pBFT (Practical Byzantine Fault Tolerance) in its PoS (Proof of Stake) consensus engine. In the future we will allow developers to pick from a handful of consensus engines/algorithm to fit their use case better.

Response: And why would ArcBlock choose it?

Robert: We believe PoS type of the consensus algorithm is the best for blockchain that need to build applications upon. We all know PoW is resource consuming and is slow by design, it's good for use case like Bitcoin, but won't be practical for many applications.

Question: Hey there, I find on you the latest Whitepaper "you'll be able to make initial coin offers (ICOs) with ArcBlock’s application token once you've built and deployed your applications with ArcBlock". As my understanding, ArcBlock has a platform to optimize for ICO, right? What requirements to make ICO or dApps on ArcBlock? Any fees to issue? And there are thousands scam ICO projects from 2017 til now. How do you prevent that?

Robert: Issue new token, new digital assets is very easy on ArcBlock based blockchain. Much easier than Ethereum. More than just create token and assets, ArcBlock's platform allow you do a lot more with them. We help you to make those token and asset to become something useful (as applications). It's free to develop dapps or build new blockchain with ArcBlock. You only need to pay when you provide service with ABT Network or you build it for enterprise use. Developers can simply start to build for free. As a tech platform we don't cover anything beyond technic part. ICO Scam is not related to technology itself.

Question: What makes ArcBlock different from other blockchain platforms?

Question: As I know, ArcBlock solved scalable problem, so how is maximum ArcBlock's TPS can reach?

Robert: The TPS will depend on the node performance and how many nodes on a blockchain. A typical TPS design we see in our clients will be around a few hundred to thousands for a single chain. Since ABTNetwork is a inter-connected blockchain network design, you can archive much higher overall TPS by load balance into multiple chains. Just help understand TPS better, a system with 500 TPS can handle millions of Daily Active Users. The Ethereum today is around 20 TPS in average, the EOS average TPS is around 70 (though it highest tested TPS claim to be 3000 or so).

Question: Can you share a bit about your roadmap in 2019?

Jean: Here is the our roadmap 2019 for your reference: https://www.arcblock.io/en/roadmap

Question: Could you give us a quick overview of all the elements that make up the ArcBlock network?

Robert: https://www.arcblock.io/en/post/2019/05/21/5-graphics-to-foresee-blockchain-networkThe article I wrote above is a perfect answer.

Question: Is ArcBlock will use Dual-token in the future?

Robert: We are considering if we should adopt Dual-Token however we haven't concluded it yet.

Question: I see ArcBlock have Blocklet. So can you explained a little bit about blocklet? how does it work and why it's importance to ArcBlock?

Jean: You can see the role of OCAP in this graphic. 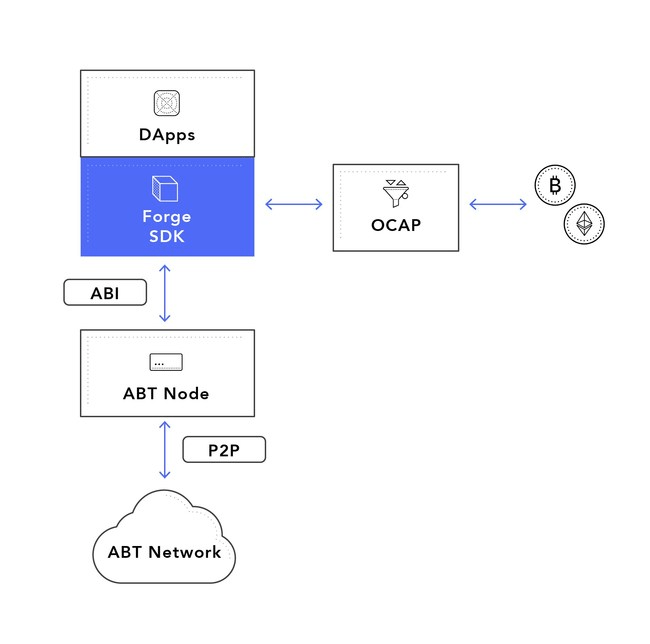 Question: Which market will ABT focus on the first phase? and tell me a bit your preparing to take over the market?

Robert: We love developers. ArcBlock platform is all about developers.

Question: Are ArcBlock have plan to issue Security token?

Robert: ArcBlock platform is application platform, If there is a developer want to develop an application that issuing security token, it's doable. However ArcBlock itself won't issue it.

Question: Do you think cross-chain solution is necessary solution for the blockchain right now?

Question: What is the basic difference between ArcBlock's OCAP & Cosmos's IBC Protocol?

Robert: Cosmos's IBC is not there yet. OCAP can be used today.

Question: I see, ArcBlock have partnership with Quarkchain. So what exactly Quarkchain do or help ArcBlock?

Robert: So far we are marketing partners. We'll see if there is anything from tech or product part in the future.

Question: What's your market size? And according to you, how changing of the market in the future?

Robert: A recent report said in the next 10-years, blockchain will generate more than $3.1 trillion in business value.

Moderator: You’ve been working on project for more than 1 year. Have you reached all important milestone in your road map?

Robert: I would proudly say, ArcBlock is probably one of the very few projects that can keep roadmap and milestones as scheduled.

Here is a 2019 roadmap, as you can see we executed it really well https://www.ArcBlock.io/en/roadmap

Question: Can you tell more about which situation makes inflation or deflation?

Robert: ABT is designed to have fixed amount, and is circulated. There is no inflation. The deflation could happen for those who forgot the private key.

Question: Could you tell me what your weakness is?

Robert: We are still a small team and even we are first mover in this space we will face potential competition from larger companies.

Question: ABT Wallet is perfect when can I put BTC in it?

Robert: We will allow you to put BTC, ETH, ERC20 and ABT native token in the near term. We will also allow for any application token and asset to be stored as well. Stay tuned.

Question: What do you think about blockchain market in next 5 or 10 years?

Question: If you had to pick one name you liked the most in a tons of blockchain project out there. What the name you choose and why?

Robert: Cosmos, their Cosmos SDK is similar to our Forge SDK. And they also promoting inter-connected blockchains.

Question: What make you think Forge SDK better than Cosmos SDK & why?

Robert: Forge SDK is a "full-stack" SDK, we make it easy for developers from backend to frontend. Cosmos SDK is also very well designed, however it only focus on the backend.
ArcBlock Here is the Intro to Forge for your eyes: https://www.ArcBlock.io/.../introducing-forge-framework…

Question: Can you have to describe ArcBlock in 100 words, how would you describe it?

Moderator: It’s 23:10. Sorry to announce that the AMA is over. Thank you again for being with us and best regards to the ArcBlock team.

Jean: Thanks to all of our Vietnam friends. A lot of great questions were raised and we appreciate the chance to tell you more about ArcBlock.