Get Started
ABT Wallet Telegram AMA

ArcBlock Discusses Launch of ABT Wallet with Telegram Community

Moderator: Hi everyone, thanks for joining us for today’s ArcBlock AMA. As you all know we launched our ABT Wallet today and are excited to tell you more about it. You can find our official release here: https://www.arcblock.io/en/post/2019/05/20/abt-wallet-launch.

You can download the wallet for Android and iOS by simply visiting https://www.abtwallet.io. Tonight, CEO and Founder of ArcBlock, Robert Mao is joining us. Over the last few days we have been gathering some questions from the community and to help get more questions answered I will provide the community questions to Robert. In the end, if we have time, we can open it up for a few more questions.

Robert: First of all, I would like to thank the ArcBlock team for their efforts and our new ABT Wallet represents a big step forward to ArcBlock and a small but significant step forward for the industry. The ArcBlock team has spent the last 6-months solving the problem of decentralized identity and how to make it usable for everyone and it is now available on Android and iOS for anyone to download. We also thank the community for being patient with us and allowing us to focus on making the ABT Wallet great. So, let’s get started.

Question: We’ve seen ABT Wallet described as the first of its kind decentralized wallet and the most advanced encrypted digital wallet. Could you describe for us how ABT Wallet compares to traditional crypto wallets in the marketplace? For example ImToken.

Robert: ABT Wallet is a true “decentralized” wallet, which means only you can decide what’s in the wallet and what can put into the wallet. In the past, the wallet app developer team decided which token it will support. Some of those app even try to charge projects for supporting their token. ABT Wallet supports the new “Open Wallet Protocol” (will be released soon), any assets support this protocol will be able to show up in the wallet, if YOU want to. Also, ABT Wallet is a Decentralized Identity (DID) wallet.

We are actively following and contributing to W3C DID specification, which is currently versioned at 1.0 at this moment.

For those who don’t know, a DID wallet means the wallet will manage identities for you. DID is a self-sovereign Identity, and it has many advantages. However, to make DID work it needs quite a bit cryptographic computing and key management because without a powerful computer it won’t be usable for human. 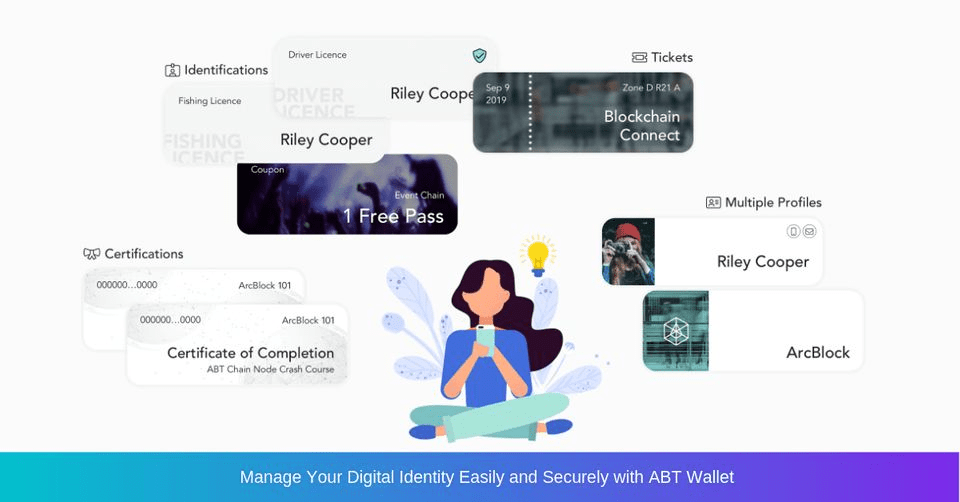 Thanks to today’s mobile technology, we all have a powerful computer with us, all the time, and always online. ABT Wallet is the application to help you manage all those keys associated with DID technology.

Question: What can I do with the ABT Wallet?

Robert: I’d like everyone to try our ABT Wallet in our demo section. https://abtwallet.io/en/profile/ You will see 3 basic use case we put for a simple demo:

First of all, download the app and use your DID wallet to login to the service. Then you can try “Payment”, “Certification”, “Proof of holding”

These 3 examples are just the tip of the iceberg when it comes to DID. For anyone who wishes to learn more about DID, W3C actually put together some awesome documents: https://w3c.github.io/vc-use-cases// 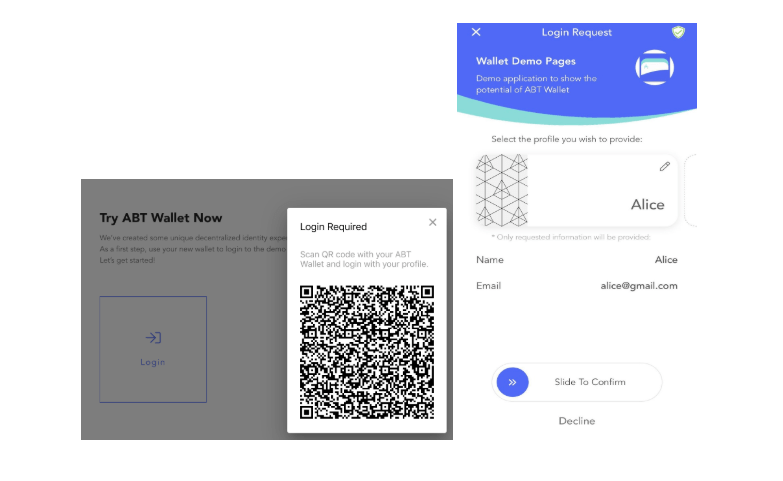 Question: When will ABT Wallet include the ability to deposit tokens? And does the wallet have other capabilities beyond decentralized identity?

Robert: It has the ability to deposit tokens already, however we didn’t enable BTC, ETH, ABT yet. You can try the demo and get some free test token “TBA”. (A reverse of ABT). Collect TBA tokens for futur prizes and ArcBlock gear.

We plan to make ABT Wallet stay simple, useful and focused. It’s a crypto wallet that supports DID, multiple digital assets, but we won’t try to put everything in it like many of those wallet app try to be. Take a look at your wallet, do you carry around currency from a bunch of different countries? Our goal is to make it useful to the individual user and to adapt to their digital day.

Also, there won’t be “dapps store” inside it, it won’t become a social network of any kind. :)

Question: Can you share more about the economic model of ABT wallet, and whether future versions of the wallet will include rewards for activities like staking/mining?

Robert: ABT Wallet itself is just an app, it doesn’t have an “economy model” so don’t get confused with the token economy of the ABT Network. ABT Wallet itself doesn’t support any reward/staking/mining itself, however it’s a tools to support services that might open up for those activities. Stay tuned!

One important thing ABT does is, it always verifies things for you, whenever you have any transaction, the ABT wallet will verify against the information independently. This is one advantage of the digital wallet compare to the traditional one. It’s smart, it help you to verify data/transaction/assets.

Robert: We try to make ABT Wallet generic and use standard building blocks. So all developers can take advantage of it. We will soon release the ABT Wallet SDK, so it’s really easy for a developer to integrate support for the wallet with little effort. E.g. if you want to build a website that supports DID authentication., we will have a starter kit and a developer can create a scaffold website up and running with just one command line. 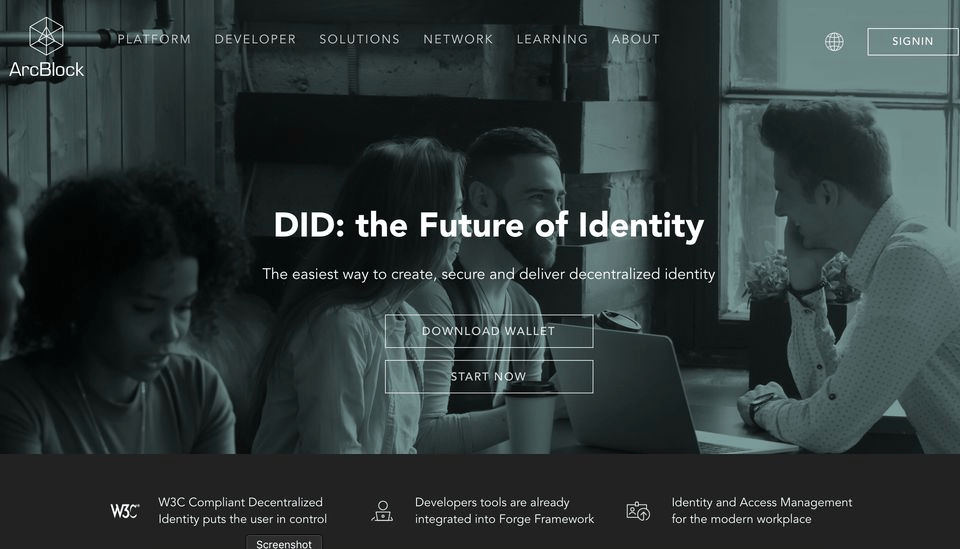 We will also release mobile app SDK later this year, for developers who wish to have customized wallet support inside their app will be able to do so easily.

Question: With Microsoft’s recent press release indicating that they are building a W3C compliant identity system using Bitcoin, it is our understanding that anyone building an identity solution based on the W3C standard that it will be interoperable with other identity solution. So, does that mean we can use our ABT Wallet to login to Microsoft’s service?

Robert: The good news is, Yes.

If everyone follows the standard the vision of W3C DID is that every DID identity provider will work with each other. Not only the identity itself, but also the verifiable claims. If this vision becomes true, it will be a whole new world for the users. It’s going to a big win for all users.

Let’s hope we can make it! Together!

Question: The DCC (distributed bank chain) has a distributed autonomous identity (DCC ID) that uses similar ideas as the W3C DID so my question is whether the ABT Wallet will be able to provide financial functionality as it relates to things like mortgages, loans, financial management and so on? Could an institution issue a debt note through the ABT Wallet? What about ICOs?

One scenario where adoption is likely to be quick is KYC as this would be critically important for finance applications, exchanges, ICOs etc. With DID, you don’t need reenter KYC details over and over for everyone, you don’t need to give away your private data to others just because you want to use their service. Instead you can create a profile for KYC from a professional providers, and then in the future you control what information you can provide for services.

This is just one scenario the DID can enable. 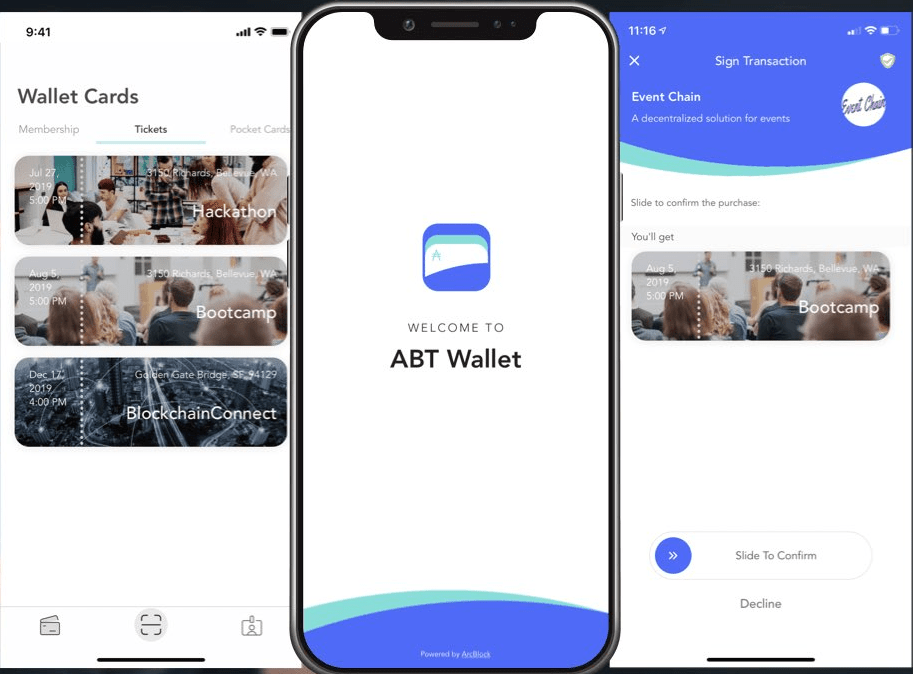 Question: Will there be a Web ABT Wallet?

Robert: We will have one in the future, it will serve as an agent of your full function wallet just make user experiences better.

Question: Thanks, some in the community have asked about staking and when you expect that will open up? Any ideas?

Robert: We will announce the staking design soon. As we planned in our previously announced roadmap, we will first release a proposal to the community for the review and trail run, stay tuned.

Question: Is abt an erc20 token?

Robert: Yes, we will support ERC20 and native token swap soon, and it’s all happen with the ABT Wallet, the user experiences will be very smooth.

Question: Is the ABT Wallet an important step for the blockchain industry?

ABT Wallet is a small but important step for the future of blockchain. And it’s support for Decentralized Identity and crypto assets will be proven to be critical for the future blockchain applications that can actually be used in our everyday life.

Thanks everyone for participating. We’ve covered a lot and our teams will be launching some new apps over the next few weeks and we are looking to you to join us as an ArcBlock community and helping us spread the word about our project.

Moderator: Thanks To Robert Mao for joining us tonight, and thanks to you the great ArcBlock community who joined us. We are excited to keep sharing what we are working on and working together to make ArcBlock a leading blockchain project worldwide. If you haven’t already, do try the demo here https://abtwallet.io/en/profile and you can also learn about some of the basics for the wallet here https://www.arcblock.io/en/post/2019/05/15/5-things-to-do-with-your-abt-wallet

If you have any further questions let the Admins know and they can forward the questions along. If you are a developer, we will hold a technical learning session on Tuesday on how to build an app and integrate decentralized identity in just a few simple steps. You can register online at www.arcblock.io/en/learning. Stay tuned for more updates and we will be releasing new DApps over the next few weeks that will allow you to continue to explore your wallet and begin running your own decentralized activities on your own. Thank you again to the ABT Telegram Community.